Jan. 11, 2005  Staniel Cay, the Exumas    The kids left us at Norman's Cay on Jan. 8, via a chartered five-passenger plane on an old airstrip built by Carlos Leder, a Colombian drug lord who had extensive operations there before the FDA put him away.  We had a great visit with them.  Armand dove in Nassau and came face-to-face with a nurse shark and saw a barracuda and rays while he snorkeled.  He also caught dinner for us and two other boaters....conch! We cleaned them on the beach.  Isabelle made a delicious conch chowder.  She spent her time walking the islands with Scruffy and swimming.  We were sad to see them leave us, but knew they had much to do back at school.  The water in the Exumas is spectacular, turquoise blue and gin clear.  You can almost always see the sandy bottom.  Phil caught lobster and gave us one for dinner... it was great.  It was nice to reach Staniel, where we were able to drop off trash and buy some provisions.  The famous Thunderball cave is here, where they filmed a James Bond movie.  Next stops include Farmer's Cay, then Georgetown where many amenities exist and it will be the time to fuel and provision up before heading toward Turks and Caicos. 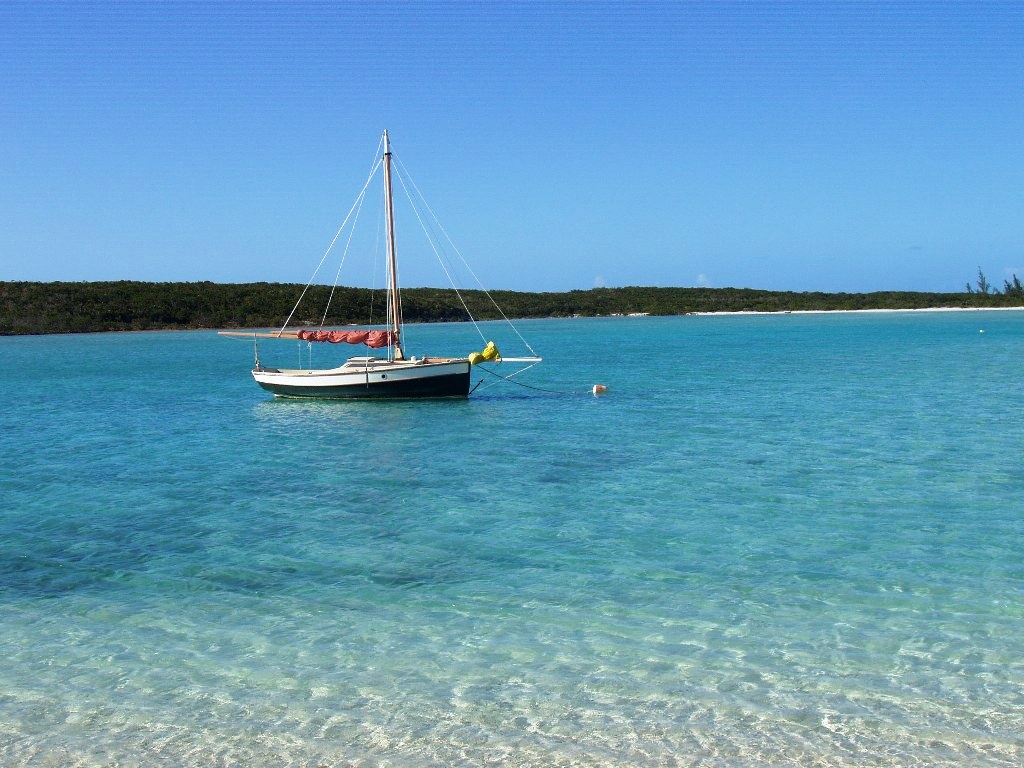 Feb. 3, 2005  Turks & Caicos    Sorry!  We inadvertently erased the photos from our camera, so no pics for a while! We're still in the Turks after arriving on Jan.29, waiting for a weather window to continue to the Dominican Republic.  We had stocked up in Georgetown, then continued to Rum Cay and Clarencetown on Long Island.  The marina in Clarencetown was superb and the staff very friendly.  We had sport fishermen give us some wahoo and grouper, it was so delicious!  Georgetown was beginning to get busy, with many cruisers settling in for the season.  There are many organized activities for the cruisers there, but it wasn't our cup of tea.  We had a pilot to guide us into the Turtle Cove marina here in the Turks...glad we had the guide as was not easy.  There's a lot of development going on here and there are many beautiful homes and resorts.  The restaurants here are excellent; the Terrace at the marina is superb, and I had sushi for the first time since leaving the states.  However, the terrain is much like the Bahamas, scrubby and dry and everything needs to be brought in to be planted.  The waters, however, are turquoise blue and true to the travel brochures.  It's still too cool for us to venture into the waters, and we're looking forward to warmer waters and lush foliage as we continue south.  Our friends Phil and Jan stayed behind in Staniel Cay to do some exploring, while Claude and Lyndia have continued on with us.

Feb. 9, 2005  Dominican Republic     We arrived on Feb. 9 in Luperon, the DR.  The anchorage was huge and filled with many boats, many left there by their owners until they return.  Checking in with immigration was comical, and there was a lot of pomp and circumstance about entering and leaving.  The fee was about $70.  The Commandante and Benjamin (who orchestrated the event) , boarded our boat and "suggested" a contribution so that they could ensure the safety of our boat.  A lot of greasing of the palms goes on here.  The town itself was very poor, and it was depressing to see the living conditions there.  However, we rented a car and visited the north coast, and the countryside was very beautiful.  We purchased some delicious lobsters from the local fishermen.

Feb. 15, 2005  Puerto Rico     We left the DR on the 15th and crossed the Mona Passage to Puerto Rico in 41 hours.  We went two days and two nights straight, and poor Scruffy went into hibernation and held himself the whole way until we arrived.  We saw whales in the passage which was great.  We arrived in Boqueron, a funky beach town, but had to rent a car to get to customs in Mayaguez.  The people here are so friendly and go out of their way to help.  It's strange to be back in the U.S. and visiting Wal Mart. This side of the island is very dry.   We then traveled during the night to avoid the choppy waters during the day to Ensenada, then to Salinas.  Salinas is a large bay filled with boaters.  The town is fairly run down but services are available.  Claude and Lyndia went ahead to the Virgins, as they planned to spend a lot of time cruising there.  On Feb. 28, Susan's birthday, we drove to Old San Juan and had a memorable seafood lunch.  We loved this town, so quaint in Spanish architecture and so lively.  We now head to the Spanish Virgins, Culebra and Vieques.  These small islands were not quite what I was expecting...the land is dry and not lush; however, tourism is expanding there and the waters are beautiful.

March 11, 2005  BVI     St. Thomas is such a busy port, with cruise ships going in and out all day long.  So many boaters are here.  The main drag is full of jewelry shops...for the cruise ships I guess...and that's about it.  We rented a car and toured the island.  The other side of the island is very nice, much more quiet and peaceful.  Just off of St. Thomas is Water Island where we enjoyed hiking.  St. John is also a lovely island to hike around.  We took Scruffy for many walks on the trails.  He is an illegal, by the way, as the British islands don't allow dogs on land, so we did not declare him.  The town is bustling with lots of shops and restaurants for the tourists.  It is quite expensive.  Sailing the BVI is always fun, with many places to tuck into.  We explored Roadtown, Marina Cay, Cooper Island, Normans Cay and Leverick Bay.  We caught up with our friends Claude and Lyndia at Normans, who decided to stay longer in the Virgins while we decided to press on to Anegada.  We had been to the Virgins before, and we were excited to go back to Anegada, where the lobsters are terrific.  It's tricky getting into due to the coral, but once you're in, you will enjoy some private long, white beaches.