October 2010  To El Paso    We left Los Altos at 4 am on Friday, October 29.  We spent our first night in Scottsdale, Arizona. Saturday's drive was long and tiring, and we were happy to finally arrive in El Paso on Saturday at 4:00 pm.  Toby was a trooper during the drive, and enjoyed the views next to Pat.

Pat left for work in Canada on Sunday, so Toby and I kept busy by exploring the town.  We took a great hike to Franklin State Park, the largest urban state park in the nation covering 37 square miles.  The mountains are rugged and form a stunning backdrop to the city, overlooking the Rio Grande.

Toby and I explored the neighborhoods of El Paso, downtown, the university, the Museum of Art and the mercado.

Pat arrived home on Friday night, and on November 6 we drove to San Antonio, Texas.  Having lived in Houston for 15 years, it felt familiar to be driving through the hill country of Texas and revisiting San Antonio.  Pat left for work on Sunday, and Toby and I discovered McAllister Park, a huge park with lots of trails and a dog park.  I visited the mercado and the Riverwalk.  The day I was supposed to leave for Laredo, where I would meet Pat and cross the border, someone tried to break into our car.  The passenger door handled was busted halfway off and the back window was smashed.  Luckily nothing was taken, and I was able to get the window replaced the next morning before I left for Laredo.  The other repairs will have to be done in Mexico.  Off to Laredo!

Pat flew in from Canada on Wednesday, November 10.  We crossed the border on November 11; the crossing was surprisingly quick and easy....30 minutes (despite getting the red light at declarations).  I was nervous once we were driving in Mexico because of all the cartel violence especially near the borders, but we saw nothing out of the ordinary, thank goodness.  We did see a couple of military convoys on the highways, and it was comforting to see their presence.

We spent the night in San Luis Potosi and arrived in Guanajuato at noon on November 12.  Guanajuato is located in the geographic center of Mexico, about three and half-hours north-west of Mexico City, and is one of Mexico’s most famous tourist spots. It is located in one of the richest silver mining areas of Mexico, and is well known for its wealth of fine colonial era Spanish architecture.  It is a UNESCO world heritage site.  The city is situated in the Veeder mountains at over 2,000 meters (6,562 ft) above sea level and the buildings climb up the side of the mountains surrounding the city center.

The casita we rented online exceeded our expectations, and we're excited to be staying here November, January and February (we'll be in Nicaragua in December).  The casita is attached to a large home.  The garden is large with views of the Picachos mountains and has a large area I use for yoga.  Because the weather is terrific (75 - 80 deg. during the day, 45 deg. at night), we're able to eat our meals outdoors.  Guanajuato is in a valley surrounded by a Toby seems to like it too!  Martin is the caretaker onsite, and Concha is the maid.

Our casita is small but it is very cozy and functional.  There is a kitchen/living area, a bathroom and a bedroom, with French doors leading to the garden from both the kitchen and the bedroom.

We had a delicious dinner at Mercedes (a family owned restaurant, highly recommended), and explored the city the following day.  We had visited briefly in 2007, and it was great to be back!  From our casita, it is a 15 min. hike down a cobblestone pedestrian street directly to the centro.  There's so many little streets to explore and something interesting at every turn.

Guanajuato is also the birth place of the famous artist, Diego Rivera.  His former home is now a museum.  Artists Olga Costa and Jose Chavez Morado also have a museum at their former home.

The city was originally built over the Guanajuato river, which flowed through tunnels underneath the city. However, after years of raising buildings to accommodate repeated flooding, in the mid-twentieth century, engineers built a dam and redirected the river into underground caverns. The tunnels were lit and paved with cobblestones for automobile traffic, and this underground road network carries the majority of cars driving through the city today. It is one of the most notable features of the city.

I began daily Spanish classes at Escuela Mexicana.  My hours are 9 - 3, and consist of two hours of grammar, two hours of conversation, one hour culture or guided visit and one hour of cooking class (class changes each week).  I have private instruction, except for the group cooking class, which was fun and delicious.  Today we made bistec en chile guajillo or beef in guajillo (a type of chile) salsa, and it was muy rico!  Recently, I took salsa dance lessons with Luis at the school and it was so much fun (but hard!)!!  There is a mixture of students of all ages, mostly from the U.S., Canada and Europe.  At this time of year, there aren't many students, so that's great for me.  I believe their busiest time is in October, spring and summer.  The teachers are very good, and I'm sure to pick up some Spanish!

Vicente, my cultural and economics teacher... 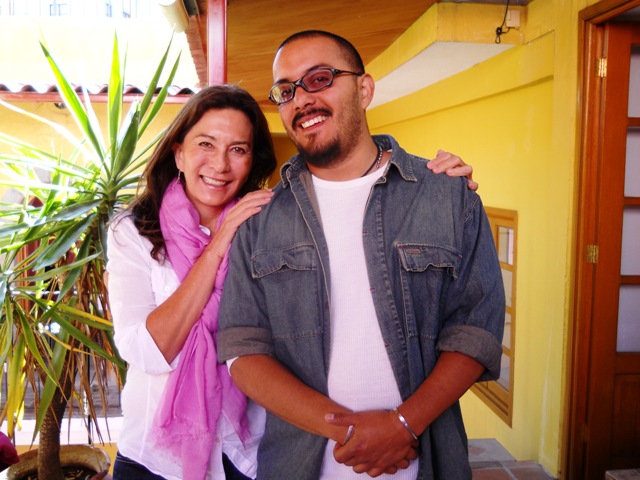 We attended the University's Ballet Folklorico at Teatro Juarez.  It was fantastic to see the traditional Mexican dances and the colorful costumes.  Pat, who has seen several performances of the Ballet including Mexico City, thought this group had the best performance of all.

For Thanksgiving, our neighbors Fred and Laura, Laura (Fred's niece) and Leith hosted a dinner for students and teachers from the school.  There was great food (turkey and all the trimmings, plus pumpkin cake from scratch...no cans!) and interesting people.  It was a lot of fun. 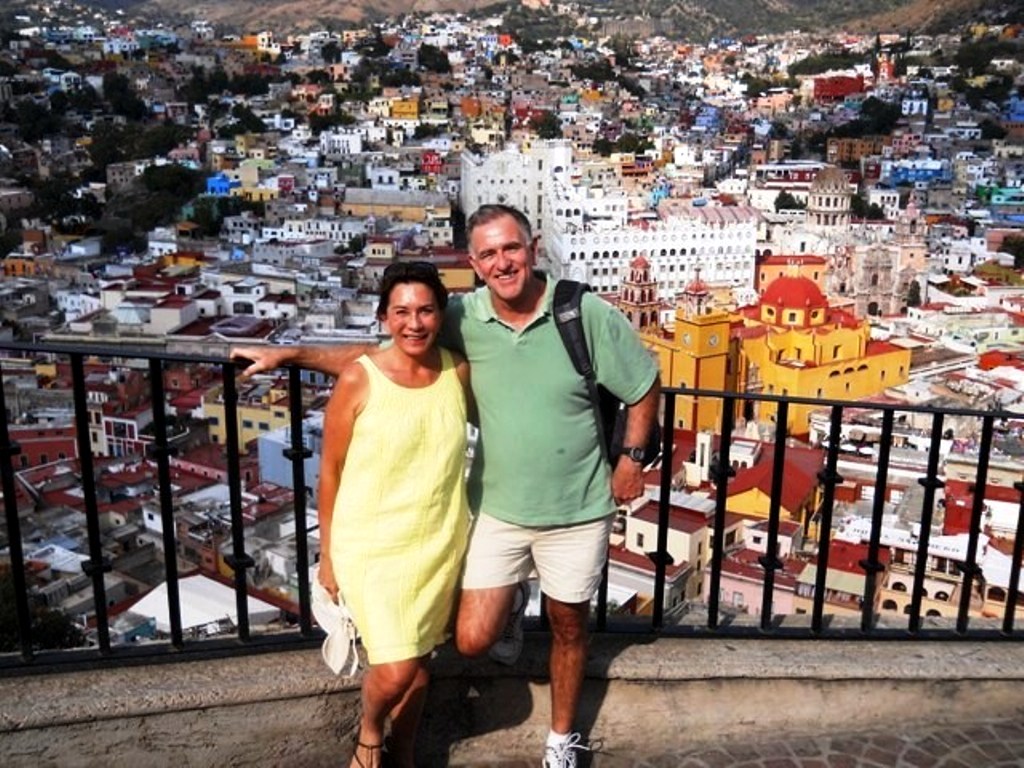 We took an hour and fifteen minute bus ride to Dolores Hidalgo, a town which is a pilgrimage for Mexicans for Independence Day held on Sept. 16.  The Mexican independence movement began here by Miguel Hidalgo, a priest, in 1810.  Today, Hidalgo is one of the most revered heroes in Mexico.  It's also famous for its ceramics and delicious hand made ice cream (I had hibiscus and Pat had pina colada).  I met a little girl, Cecilia, who gave me a tour of her family's shop where they fabricate and paint the ceramics.

At my Spanish school, I met Alana, who is here for three months studying Spanish.  She will stay in our casita while we are in Nicaragua for a month to take care of Toby.  I'm very lucky to have met such a nice person, and so is Toby! 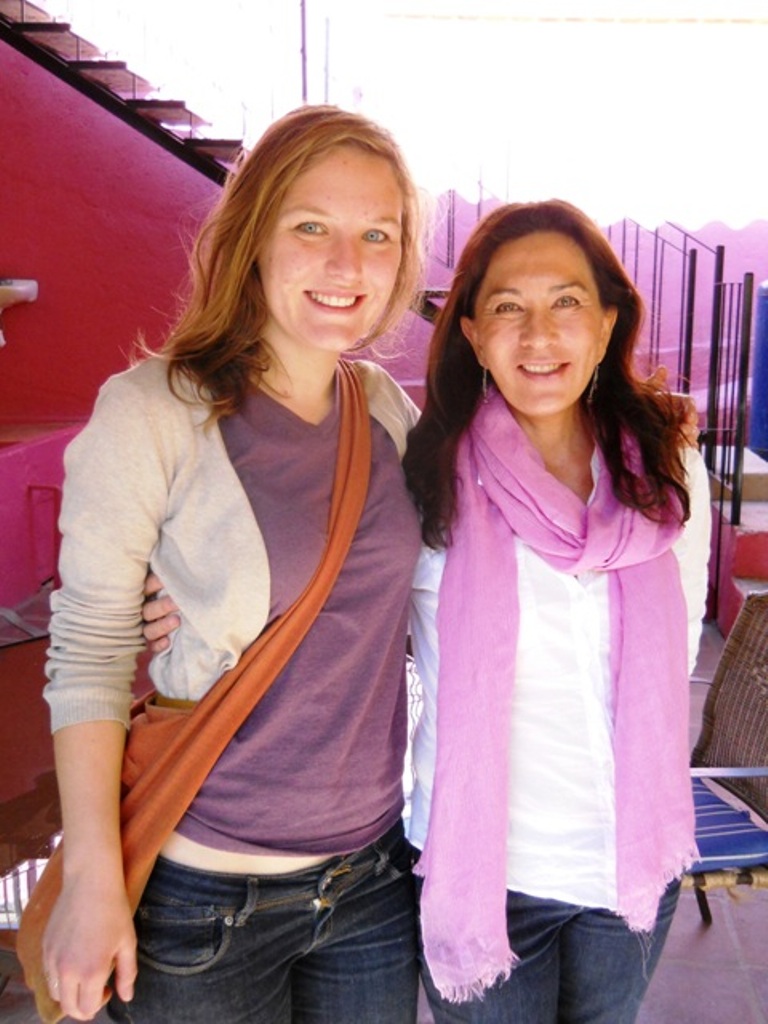 My third week of Spanish is coming to an end.  I've enjoyed my classes and teachers. I still have a long way to go, but it was a great way to get a jump start on the language.  I plan to return to the school in January for grammar and conversation classes.  December 3, I am taking the bus to Mexico City, a 4 and a half hour ride from here.  I will spend the night in Mexico City and catch an early morning flight to Managua, Nicaragua where I will be for a month.  Isabelle plans to join me on December 14 and Pat arrives for a two week vacation on the 18th.   We're looking forward to our next adventure in Nicaragua!