June 7, 2005  Dominica    We had a nice sail down to Dominica, where we check in at Prince Rupert Bay.  We had vacationed here with the kids before, and Armand was quite anxious to revisit Boiling Lake, a grueling 8 hour hike up to the world's largest boiling volcanic crater.  We love this island...so mountainous and lush.  There are, however, no real beaches to speak of.  It is truly a nature lover's paradise.  We're visited by locals paddling to us on surfboard selling fruit, bread, tours, etc.  We've rented a car to get around.  Portsmouth itself is not very exciting, and is a little run down.  However, there's great hikes in the area.  We visited the capital, Roseau, which is quite bustling.  However, the real beauty of Dominica is its rain forests and that's where we head.  We visited a small inn, Cocoa Cottage, which was for sale.  We decided to hike to Boiling Lake without a guide.  The previous time, we took a guide  and we were glad we did, as there are no real trails once you get in.  It is the most difficult hike we have ever undertaken.  You cross rivers, and claw your way up and down rocky terrain.  You cross the Valley of Desolation, which fits the description of the valley...smoke is rising from the ground and you must be careful where you step. It rained half of the time during our hike, and we were soake

d and tired.  Armand, thank goodness, was a terrific guide and we made it there unscathed.  Once there, thick mist loomed over the huge crater.  Careful not to fall in...you'd be boiled alive, which I understood had befallen some unlucky fellow.  The return trip was even worse and our legs were sore.  Armand waited for us at the bottom for 1-1/2 hours before we finally showed up.  "What took you so long?", he asked.  Ah, to be young again! 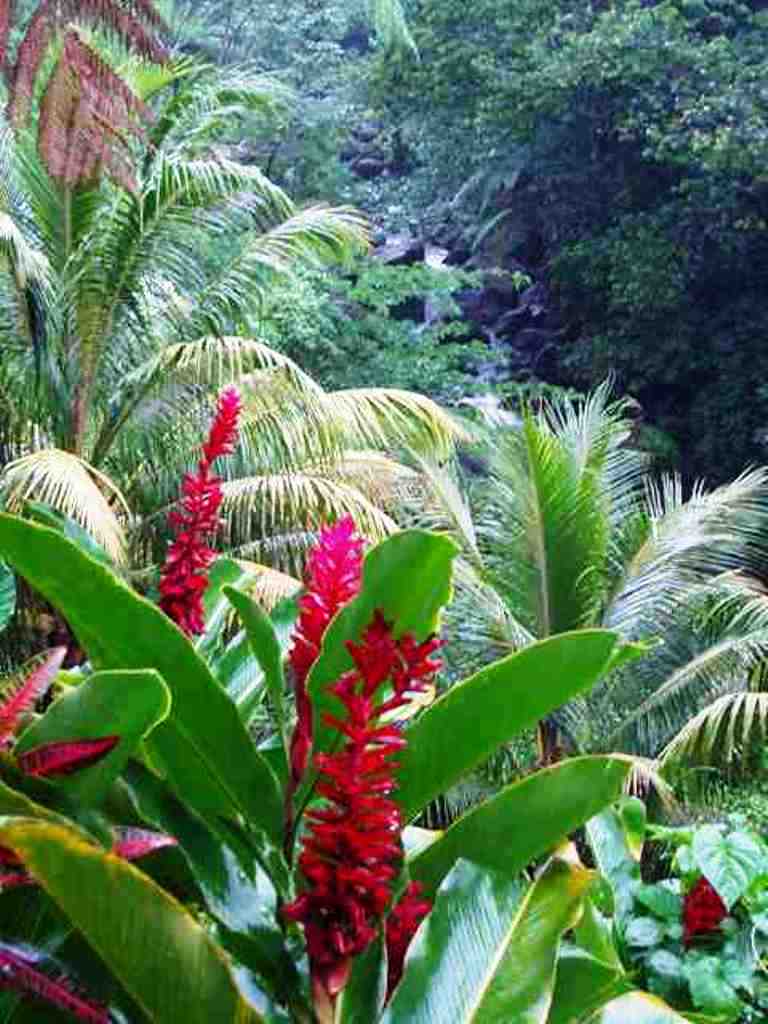 June 13, 2005  Martinique    We anchored in St. Pierre, which has a nice wide bay.  The small town is quaint and has many amenities.  Armand met a local dive instructor and dove upon a sunken ship in the bay.  We rented a car and drove up to Mt. Pelee, an active volcano, pictured below.  We hiked up about 3/4 of the way, while Armand hiked further.  It was a steep hike but enjoyable.  After lunch, we headed down to visit Depaz, a 400 year old rum distillery.  The grounds are beautiful with the view of Mt. Pelee in the background.  We took the interesting tour, and partook in a taste of their delicious rum.  We bought some fresh tuna from the local fishermen, along with fresh vegetables and fruit.  We then headed down to the capital, Fort de France, which is a bustling town.  There's an old fort to visit but the town itself is similar to a French village.  Although Martinique is a nice island, we were anxious to get to St. Lucia, as Armand had only 10 days left on his vacation. 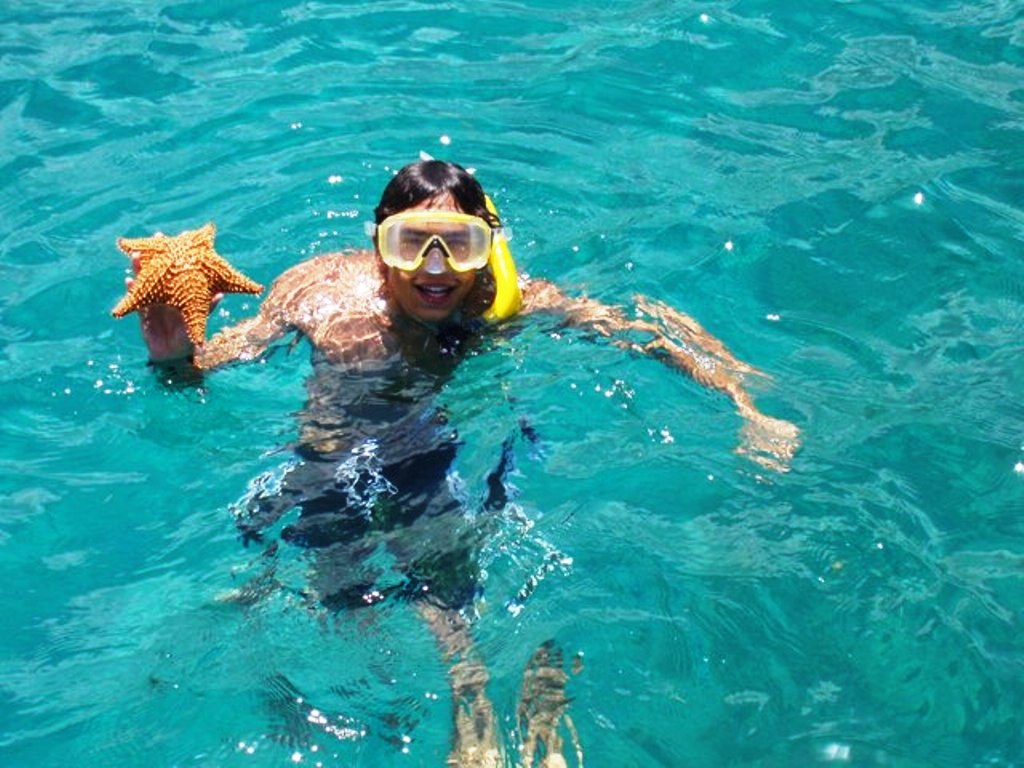 June 20, 2005  St. Lucia    We checked in at Rodney Bay, which is quite large.  There aren't many boats around now, due to the time of year...many boaters are already tucked in for hurricane season.  There's plenty of services available here.  You will find a small, beautiful bay at Marigot Bay, along with good restaurants.  We sailed down toward Soufriere and saw the two pitons, which are breathtaking.  It almost feels you are in Tahiti, with those two tall mountains just off the beach.  Armand met a local to take him up to the top of both pitons, on separate days.  There's no trail, and he said it was tougher than Boiling Lake!  His new friend took him to his family farm and treated him to some rasta fare.  We rented a car and toured the island which is quite lush.  Between the two pitons, there is a fantastic restaurant, Dasheene, where we celebrated our 11th wedding anniversary.  The view is spectacular.  Our friends, Phil and Jan, showed up and we had a nice visit before they headed south the next day. We'd love to revisit this island again one day.  Sadly, Armand departed for home on June 30, one day before his 19th birthday. We will miss him. 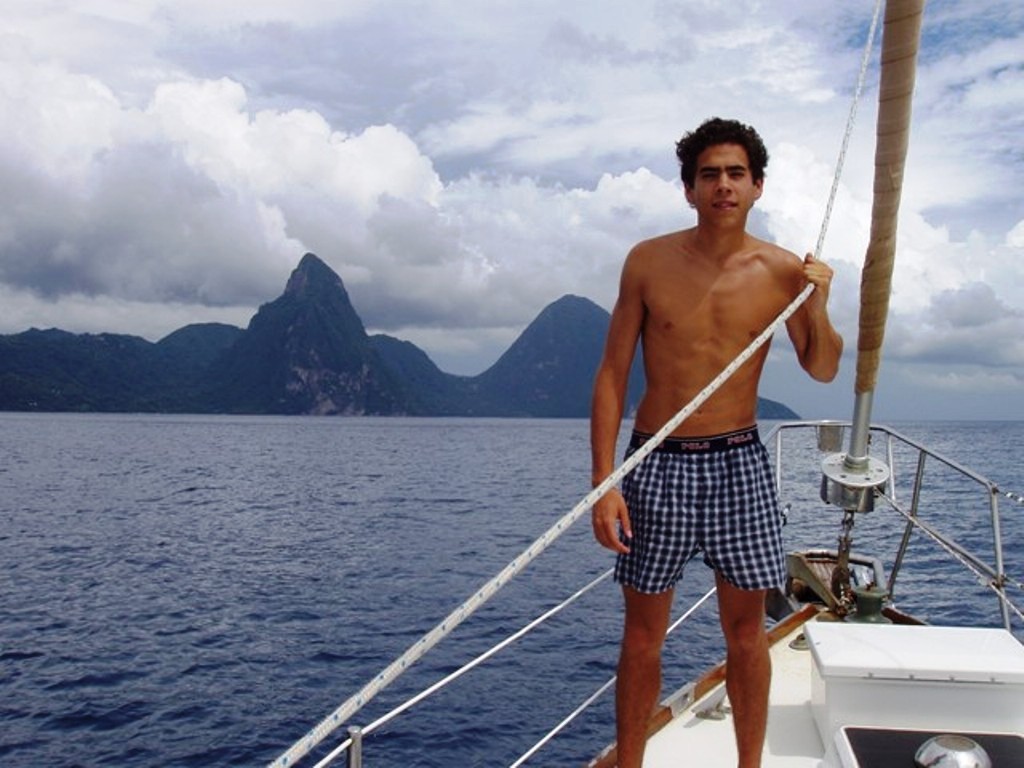 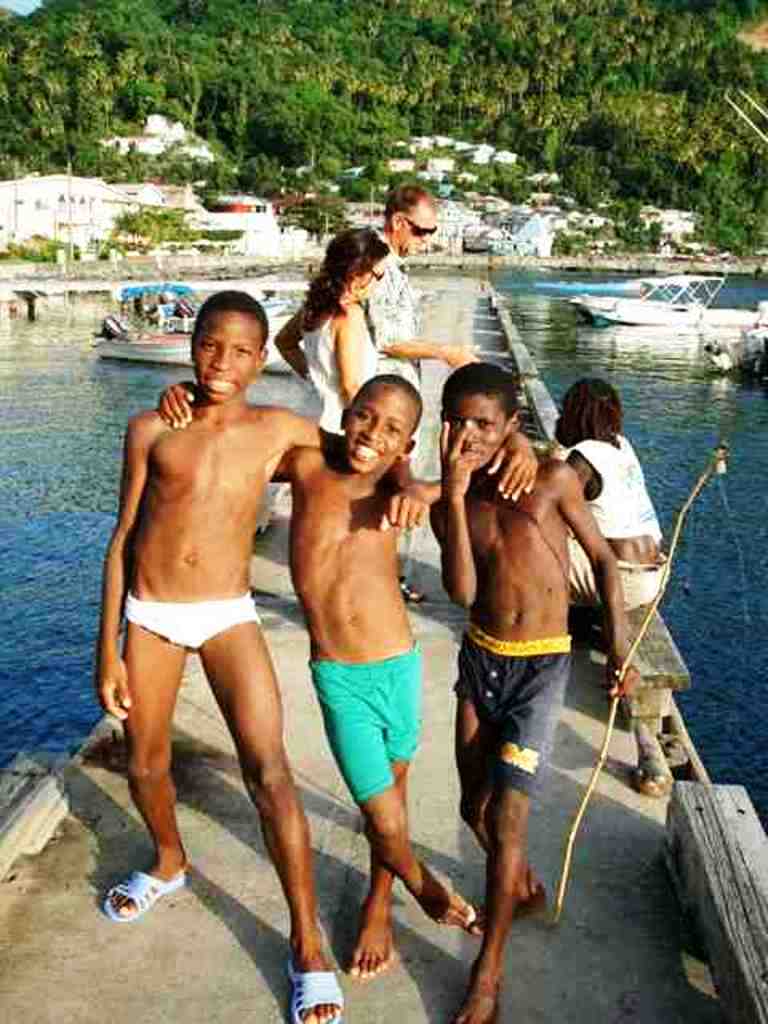