France Canal du Midi September 2015  Pat's brother Jim and his wife, Chris, invited us to join them on a boat canal cruise in the south of France to celebrate Chris's birthday.   Prior to the cruise, I flew to Nice, France to visit a friend I hadn't seen in over 20 years, my dear friend Christine.  We had known each other when we were living in Houston, Texas.  Christine is just as I had remembered her to be, beautiful inside and out.   I am so happy we reunited!

I flew to Beziers to meet Pat who had arrived via Toulouse from South Africa. So happy to see him after many weeks apart!  We waited in Capestang for Jim and Chris who were spending several days in Paris.  Capestang is a quaint village along the Canal du Midi, easily walkable, with terrific bakeries, restaurants (try the moules frites at La Galinere!) and the excellent winery of Moulin Gimie.  We tasted their wines, and had wine delivered to our boat.   Our trip was a one-way float to Bram, where we would leave the boat.  We would go through 32 locks and 108 km during our 9 day cruise.  The Canal du Midi is a 150 mile canal connecting to Mediterranean and the Atlantic seas.  The building of the canal was considered in the early 1500's, and it was Pierre-Paul Riquet, a wealthy collector of salt taxes, who made a feasible plan to build the canal to Louis XIV who saw this as an opportunity to deprive Spain of its resources.  The construction of the canal began in 1667 and it was inaugurated in 1682.  It is a UNESCO World Heritage Site, and is considered to be one of the most remarkable feats of civil engineering.  It is quite amazing!

On our second day in Capestang, we met Jim and Chris on our boat, a steel hulled barge named "Lewarne" which Jim had booked with France Afloat.  We were happy to have a steel-hulled boat as we were sure to do some bumping during our trip.

We had a great outdoor dinner under the trees with Jim and Chris at La Table du Vigneron.  After a restful night on the boat, we discovered that two of our bicycles had been taken from our boat.  The company replaced our bicycles, and off we went on the beautiful canal with our captain Jim navigating.  After a stop in Argeliers where we visited the Cave Marcelin Albert winery, our overnight stop was Salleles d'Aude.

Since 2006, more than 15,000 trees have been cut along the canal due to a fungus that has been killing the plane trees that line the canal.  We noticed workers removing trees during our trip.  These trees were planted in the 1830s to strengthen the canal banks but to also provide shade.  A variety of trees are being planted to replace them, including pine, poplar and oak.  The majority of the funds to plant these trees come from public donations. 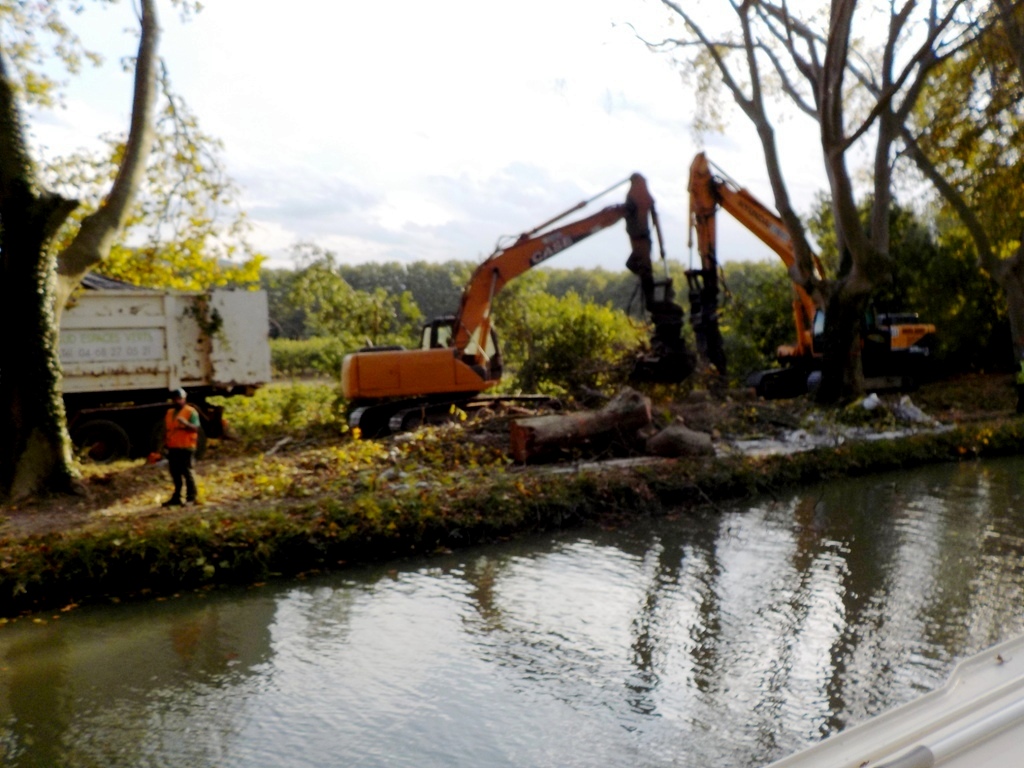 Alongside the canal, there were walking/bicycle paths.  We had fun riding our bikes into the villages during our trip.

I was nervous going through our first lock, but after a few of them I was not nervous at all.  I did bump the wall several times getting into the lock, but no major damage.  Many of the locks were self-operated:  someone had to get off the boat, push a button near the lock, and wait for the gate to open.  We would enter the lock and the gate would close and fill (or drain depending on your direction), then the next gate would open and on you went.  Many times we had to wait for boats in the lock going the opposite direction.  Sometimes there would be a lock master who would control the gates and boat traffic, especially when there were multiple locks together.   Quite impressive! 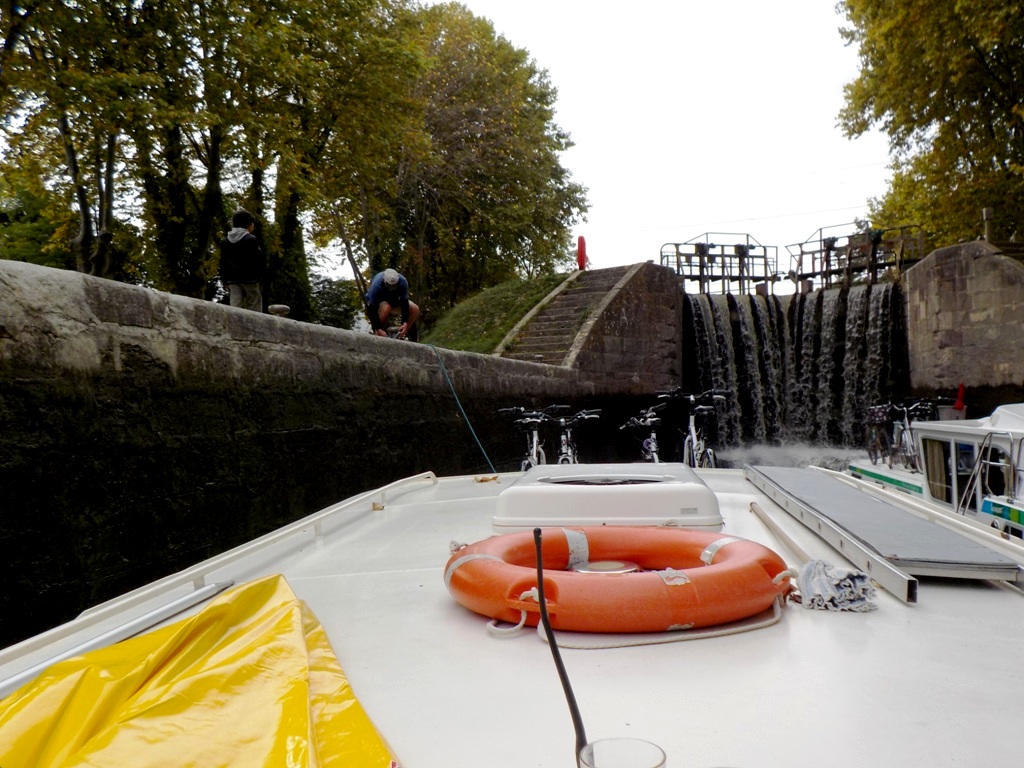 Salleles d'Aude is a very scenic village.  We had arrived on a Sunday night, and only one restaurant was open for dinner....a pizza restaurant.  Luckily, Pizzeria la Mouche had excellent food, including seafood, meats and traditional dishes.  I loved my soupe du poisson (fish soup).  Jim loved his pizza!

Our next stop was the lovely city of Narbonne.   We enjoyed exploring by bicycle, and having a great outdoor lunch.

Ventenac-en-Minervois was our next stop.  We went wine tasting at Chateau de Ventenac.  The hostess wasn't very friendly, but the wine was great!

We had lunch in the courtyard of La Grillade du Chateau.

We tied up at Le Somail, but then we decided to cruise to the next village.

Chris and I often skippered the boat, so that Jim and Pat could handle the lines to tie up the boat at the locks.

Argens-Minervois was our next port of call.  We tied up our boat, and went took our bicycles to the town of Lezignan-Corbieres in search of a place to do some wine tasting.  We never found a winery, but we did find the market where Chris bought scarves and I bought decorative nautical hooks for our sailboat.  Such a nice ride!  It is the first week of October, and the weather has turned chilly.

We had the best meal of our entire trip at the village restaurant, La Guinguette.  They barbecued the meats on an outdoor grill.  The grill was heated by roots of the grapevine.  Absolument delicieux!  Jim and Chris enjoyed their lamb chops.

Across the canal bridge, we visited the winery of Domaine des Maels. 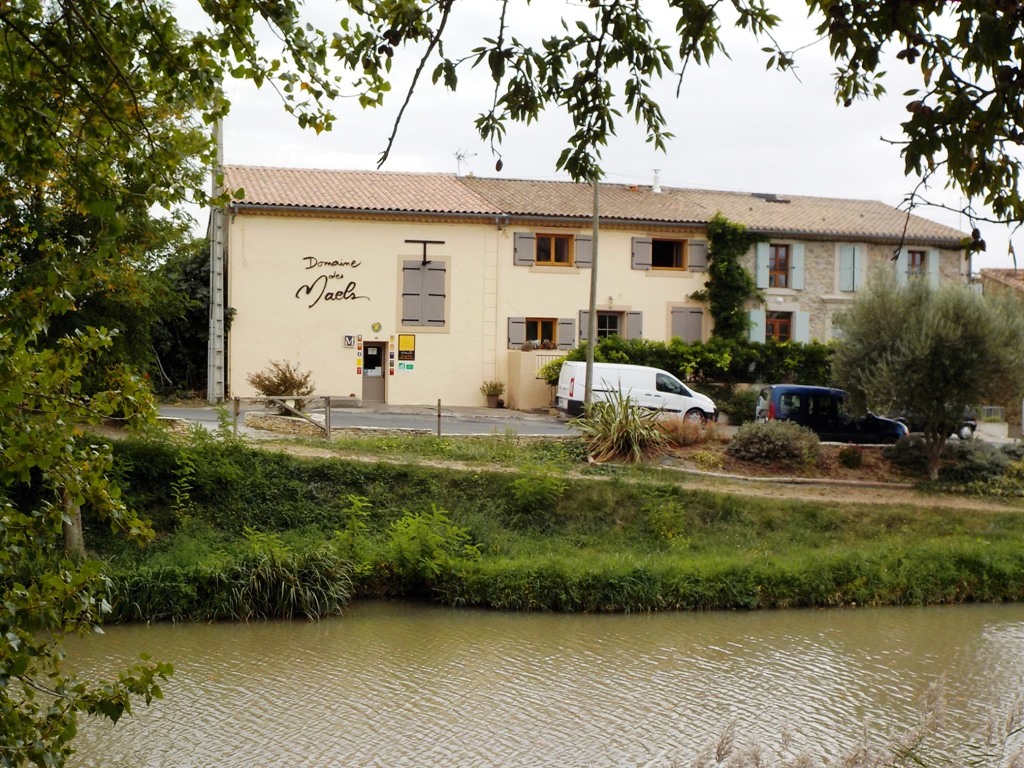 We enjoyed it, and Chris bought some delicious brandy wine.

We spent the an evening in Trebes, where we had dinner at Le Quai along the canal.   Unfortunately, we had our only disappointing meal here

We spent two days exploring Carcassonne, a World Heritage Site, famous for its fortified castle, which the Romans began to build a fort in 100 BC. and the present castle was completed in the 12th century.  It is very impressive and sits on a hill, reigning over the city.  It has two outer walls and 53 towers!  Today, it is filled with shops, hotels and restaurants.

Our time with Jim and Chris was coming to an end.  We brought the boat to Bram, where we would depart in different directions.  Jim and Chris were taking the train to Barcelona, Spain for several days, while Pat and I spent our last two days in Toulouse, France.  It was Sunday night (when most restaurants are closed) and the only restaurant open was Lotus 1, a Thai restaurant.  We were happy to spend our last night here as the food was great!   Jim and Chris, thank you for sharing with us this incredible trip.  Until our next adventure!  Here are some very pretty photos of the scenic Canal:

Pat and I took the train from Beziers to Toulouse, a large city with a population of nearly 500,000.   We had fun exploring the winding streets, the squares, market and walking along the riverfront.

We visited the Capitole (municipal administration of the city) and its square. 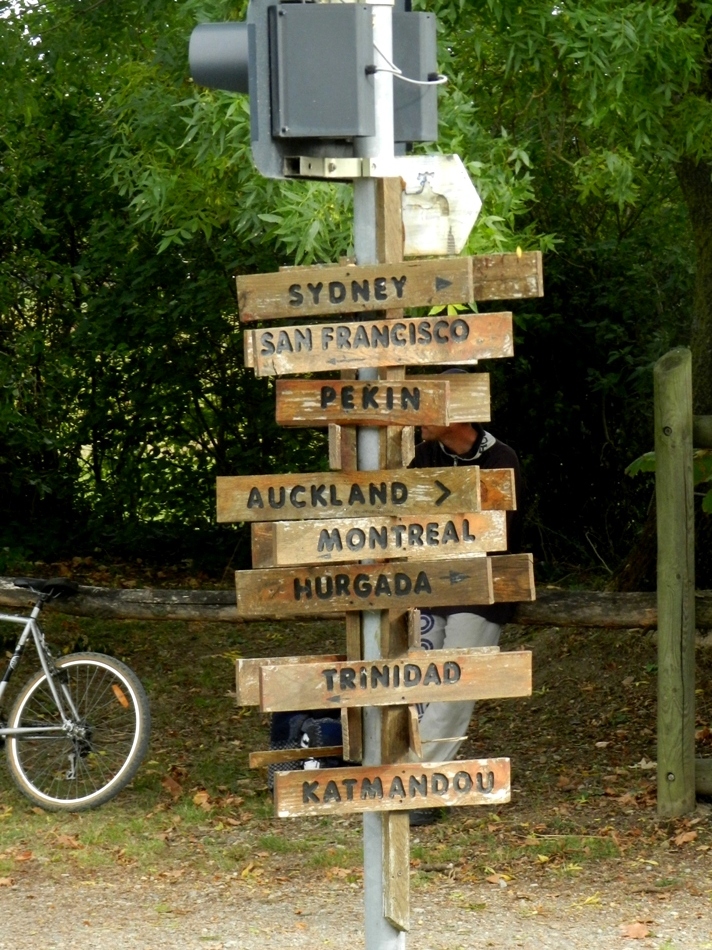 Here's to another wonderful adventure! 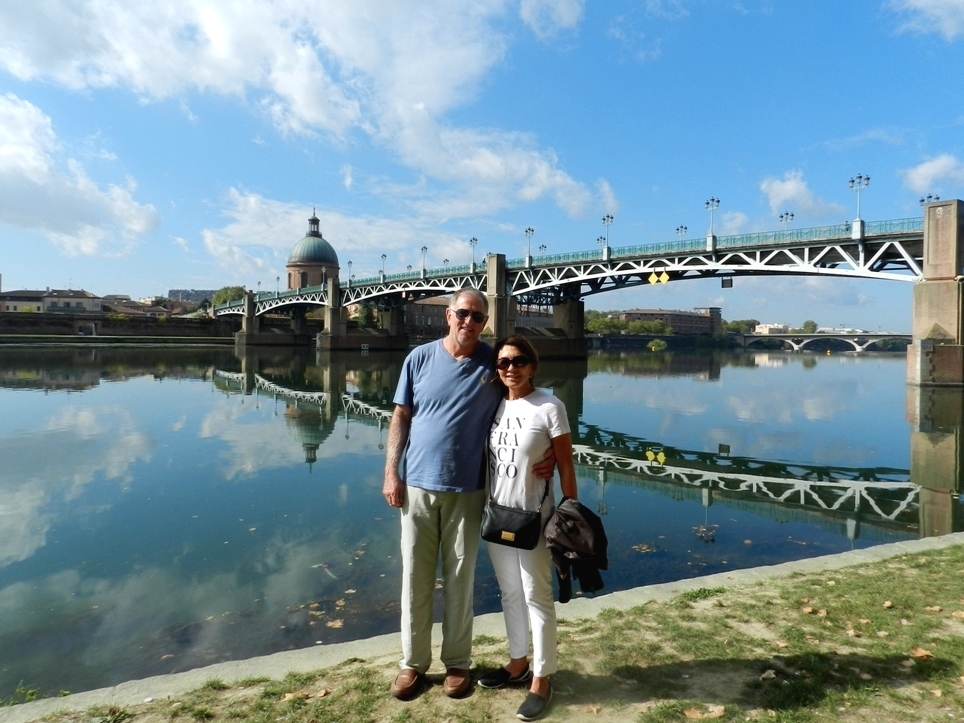