March 10, 2007    Guanaja to the Vivorillo Cays    Guanaja is a unique island as there is only one road that crosses the island, and there are only a handful of cars.  Most everyone uses a boat to get around.  The main settlement is Bonacca town, on its own cay.   There are no roads in this town, only a main sidewalk and about a dozen sidewalks that traverse it.  It's a small, compact town and there are about 5,000 inhabitants.  Guanaja was hit hard by Hurricane Mitch in 1998 and most of the vegetation was destroyed...it's only slowly returning.  We anchored in El Bight, and from there we were able to dinghy over to Bonacca town for provisions.  We also took our dinghy through the cut in the island to reach Michael's Rock, where we found great snorkeling.  The coral is pristine and there's a lot of fish.  From there, we walked down the beach to the End of the World Resort.  There aren't many hotels on the island; development is slow.  After a few days, we anchored at Josh's Cay, a delightful place to hang out.  There's a small hotel and restaurant, and they offer cruisers free moorings, ice and water.  For a nominal fee, there's internet and laundry access.  The waters there are beautiful.  From Savannah Bight, we walked (three hours one way!) to a nice waterfall.  While we were in Guanaja, we were reunited with s/v Valentina (Sonny and Kay) and s/v Lone Star Love (Greg and Judy), and met Doug and Rayene on s/v Kristiana.  It was great to see everyone!

We left Josh's Cay on March 25 to head 150 miles south to the Vivorillo Cays, traveling along with s/v Kiaa's Song.  The passage took 26 hours.  We had NE winds gusting to 30 mph and the seas were 8-10 ft. (of course the forecast was for 10-15 knot winds and 4-6 ft. seas!).  Even with our sails reefed, we were able to sail between 6 1/2 - 8 knots.  There were several squalls during the night.  Pat stayed in the cockpit all night and was exhausted when we arrived.  Along the way, we caught a barracuda (which we happily released), a fish which got away before we brought it onboard, and snagged a huge fish too heavy to reel in and for my line...it eventually broke our line and took off.  We finally caught two little tunys, and we had a delicious sashimi dinner that evening.  The Vivorillos are uninhabited and are a rest stop for cruisers as well as for fishing and shrimp boats.  We traded cigarettes for conch (we made delicious conch fritters) and fish with the local fishermen.  The water and reefs here are pristine, warm (84 deg F),  and the fish are abundant.  Giant starfish abound, and there are more than 30 where we are anchored.  We did a lot of snorkeling, and so did Kaiia and her rottweiler, Doc.  There are schools of squid, blue tang, angel fish, grouper, hog fish, puffer fish, yellow jack, sergeant majors, parrot fish, butterfly fish, bluehead wrasse, trumpet fish, barracuda, nurse sharks, and many more we can't identify. Too bad we don't have an underwater camera.  We visited bird island, where there were many frigate birds and the boobies were nesting. S/v Lonestar Love, Valentina and Kristina arrived and soon thereafter Doug and Greg speared for us a nice jack and hogfish.  One day a squall came through and we spotted a waterspout from our boat.  After 11 days, we were underway to Providencia Island, approx. 185 miles off the coast of Nicaragua.  It will be good to re-provision, as we are all out of fresh fruit and veggies!

April 5, 2007    Vivorillo Cays to Providencia Island, Colombia    We left the Vivorillos with five other boats at 4:00 am with light winds and seas and 190 miles to go.  We were glad to have company to travel with us; in the past there were a couple boats who had a bad encounter in the Media Luna area.  The conditions were calm all of the way, with only 5-10 knots of wind on the nose and seas 2-3 feet. We motor sailed all the way and averaged 5-6 knots.  However, the fishing was excellent!  The first day, we snagged six fish (along with our requisite 4 foot barracuda)....three little tunnys, two king mackerels and one spanish mackerel in the 30" - 36" range.  The second day, Pat caught a 55" mahi mahi (dolphin fish).  Mahi mahi fight hard with a lot of jumping and pulling back and forth on the line.  After 30 tiring minutes, Pat gaffed the fish and pulled it onboard.  We then caught two more mahi mahi, 47" and 39".  We also caught a 36" king mackerel.  We arrived at 4:30 pm on April 6 with a full freezer.  We shared our catch with the other cruisers, who were quite pleased as they did not have any luck fishing.

Providencia Island is a Colombian island, off the coast of Nicaragua.  It is volcanic in nature and is surrounded by reefs.  We explored the town off the anchorage and reprovisioned with food and fuel.  The snorkeling on the reef was great.  One night we went trolling in the dinghy and Susan caught a spanish mackerel (see picture below) for dinner.  The people here are very nice and the lifestyle is laid-back, with limited development and services (the internet connection here is terrible). 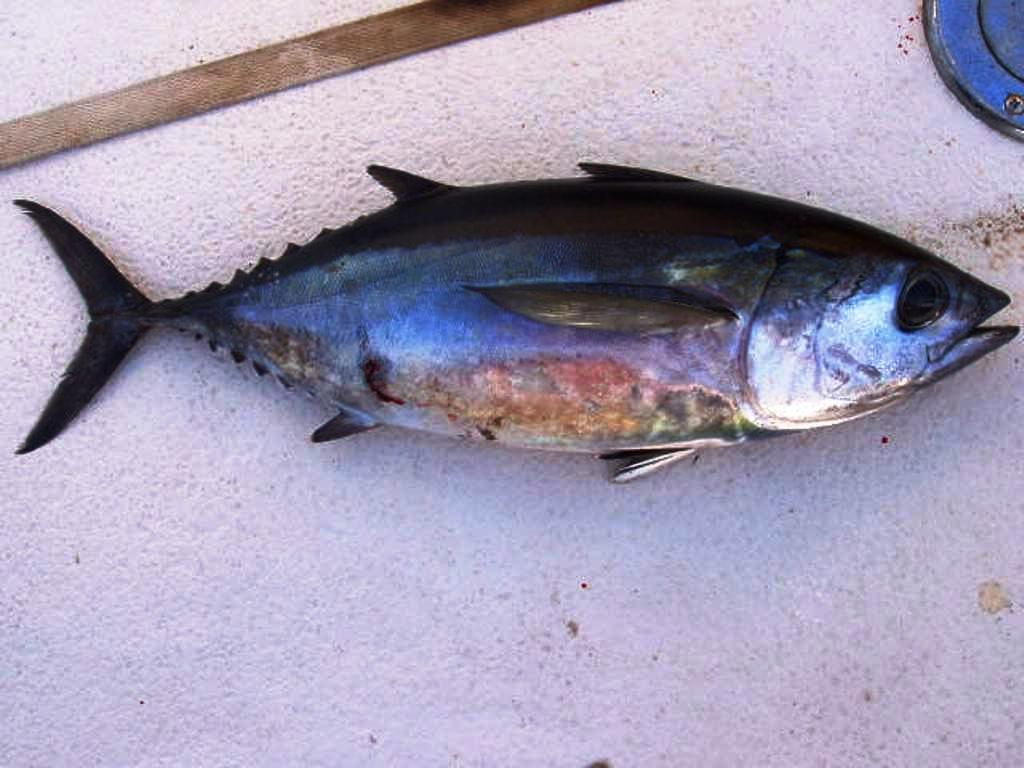 April 12, 2007     Providencia Island to San Andres Island    We left Providencia at midnight for San Andres, another Colombian island off the Nicaraguan coast..  We had a great trip; we sailed the entire 58 miles with 10-15 knot winds on our beam and seas 3-4 feet.  We set out two fishing lines out at 5:00 am; within five minutes we had hooked two 55" mahi mahi, one on each line.  It was good exercise to reel them in and Susan fileted the fish en route.  We will share our catch with another boat, as we won't be able to eat it all ourselves.     We arrived at 10:00 am; from the anchorage San Andres looks quite developed with hotels, condos, party boats and jet skis.  For mainland Colombians, San Andres is what Hawaii is to mainland U.S.. The waters that surround the island are turquoise blue and the north end offers a beautiful white sand beach.  We rented a golf cart and toured the island with Jim and Sharron on s/v Pelican's Flight.  We stopped for drinks at a restaurant that had beautiful wood and coral carvings and had a seafood lunch along the water.  Later, we had drinks on the beach and enjoyed a jam session with a Jamaican living on the island...we shook plastic bottles filled with rocks and tapped rhythm on a wooden stick while he sang.  I believe the song was "No woman, no cry".  The south end of the island is inhabitated mainly with eastern Caribbean settlers, while the north end is filled with shops run by Colombians and Middle Eastern emigrants who cater to the tourists and the cruise ships.  This is a duty-free island and there are tons of shops offering perfume, liquor, jewelry and clothing.  The main mode of transportation is via motorcyles; this is a busy island.