Leon, Mexico   Pat had a doctor's appointment in Leon, so off we went.  Leon is an easy 30 minutes from Guanajuato.  The town is very big (about 1.5 million people).  It has a huge leather industry, offering shoes, boots, belts, jackets and other leather goods to both national and international markets. There are malls (and tons of shops) of just shoes, handbags and leather clothing.  The prices were about a third of what the same item would cost in the U.S.  The central plaza is large and very pretty.  It appeared to me that the city was fairly affluent,  with many fine homes and cars and lots of industry.  They also have Costco, Sams, Walmart, Home Depot, Office Depot, Subway, Starbucks, etc.

Both Guanajuato and San Miguel de Allende have Starbucks, sorry to say.  I recently visited San Miguel again and had to take a picture of their upscale Starbucks, quite lovely inside, where the gringos hang out.

Patzcuaro, Mexico   We discovered a lovely, colonial gem of a town located on a hill on a lake about 3 hours south of Guanajuato.  Patzcuaro is one of the World Treasure Cities by the United Nations, a Pueblo Magico, and has a population of about 50,000. Coming from the desert mountains of Guanajuato, it was a pleasant surprise to see so much greenery, trees and a beautiful lake. 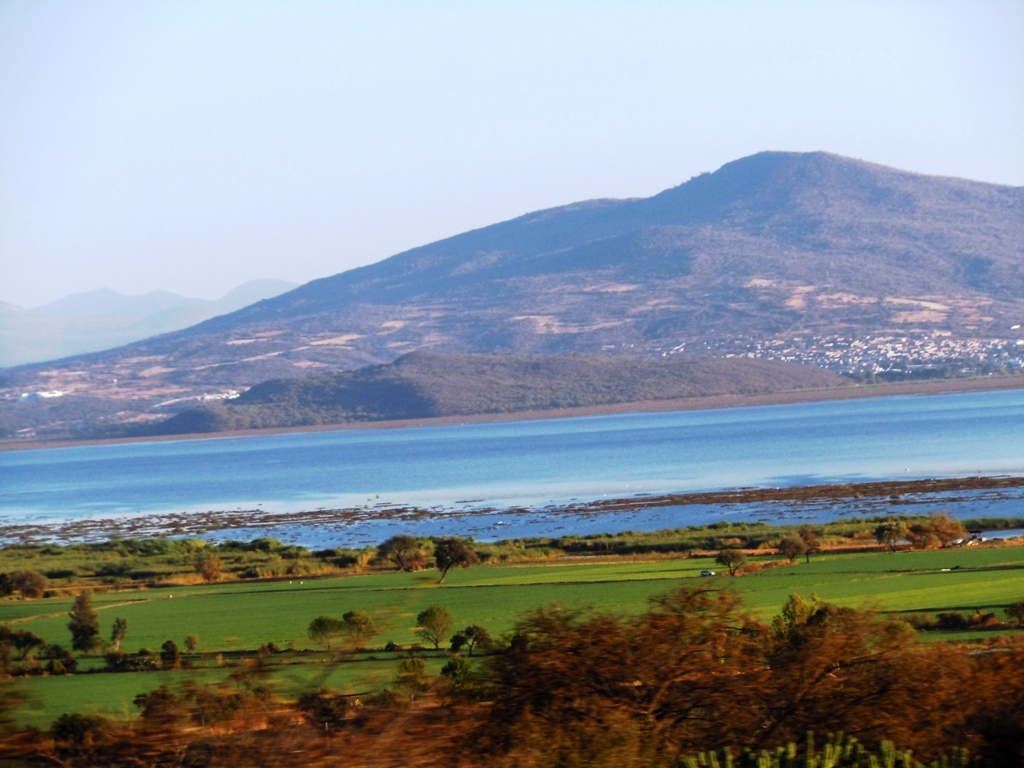 Our first surprise was staying at a charming bed and breakfast, La Casa Encantada.  Our room was large with king bed, an extra loft bed, a fireplace, a kitchen and big bathroom.  The entire place was filled with whimsical, colorful and vibrant Mexican art.  We had a delicious breakfast  in the dining room by the fireplace (fresh juice, fruit, granola, yogurt, pastries and a delicious burrito...not the kind you are thinking of!).  A couple staying there was also from Los Altos; what a small world.  If you ever get a chance to visit this town, you have gotta stay here...it is super!

Since the Mexican Revolution, Patzcuaro has worked to keep its traditional colonial-indigenous look. Unlike the capital, houses in Pátzcuaro are made of adobe and/or wood and generally have red tiled roofs. Cobblestone streets dominate the center of town down to the lake.  The town is filled with stores and vendors selling a wide variety of crafts, many in bright colors.  Patzcuaro is the market hub of the region, with smaller villages bringing in their own specialized crafts such as copperware, black pottery, musical instruments, baskets etc.

Pátzcuaro and the surrounding lake area have one of the best-known Day of the Dead celebrations in Mexico.  Markets catering to Day of the Dead abound in all of Michoacán but the best of what is to be had is in the market in the main plaza of Pátzcuaro. The holiday focuses on gatherings of family and friends to pray for and remember friends and family members who have died. The celebration occurs on November 2.  Traditions connected with the holiday include building private altars honoring the deceased and the favorite foods and beverages of the departed and visiting graves with these as gifts. The Day of the Dead is a time of celebration when eating and partying are common. The festivities were originally dedicated to the Lady of the Dead, who is now known as the modern "Catrina" (see photo below as an example).  Here is what I could find out about Catrina:

Her name is Catrina, and she has become a recognized symbol or icon for Day of the Dead in both Latin America and here in the United States. Yes, she is part of the Dia de los Muertos celebration, but that's not her true origin. La Catrina (below) was one of many skeleton images created by Mexican engraver José Guadalupe Posada.
Posada's calaveras, accompanied by witty social commentary in rhyming verse, were printed in newspapers and reached the farthest corners of the Mexican Republic. They aren't evoking death, but are mocking the living-- their defects, weaknesses and vices. Posada's skeleton caricatures have been called "calaverismo politico" -- his attempt to uncover the "rot of political and social life" in Mexico at the time. The Catrina, an upperclass lady of the turn-of-the-century, is depicted in her broad-brimmed hat and is Posada's comment on the "wannabes" in Mexico at the time who aspired to be everything French. The idea is that the rich may put on airs and wear their fancy clothes, but underneath they are just like you and me. In other words, death is the great equalizer, as we are all mortal. 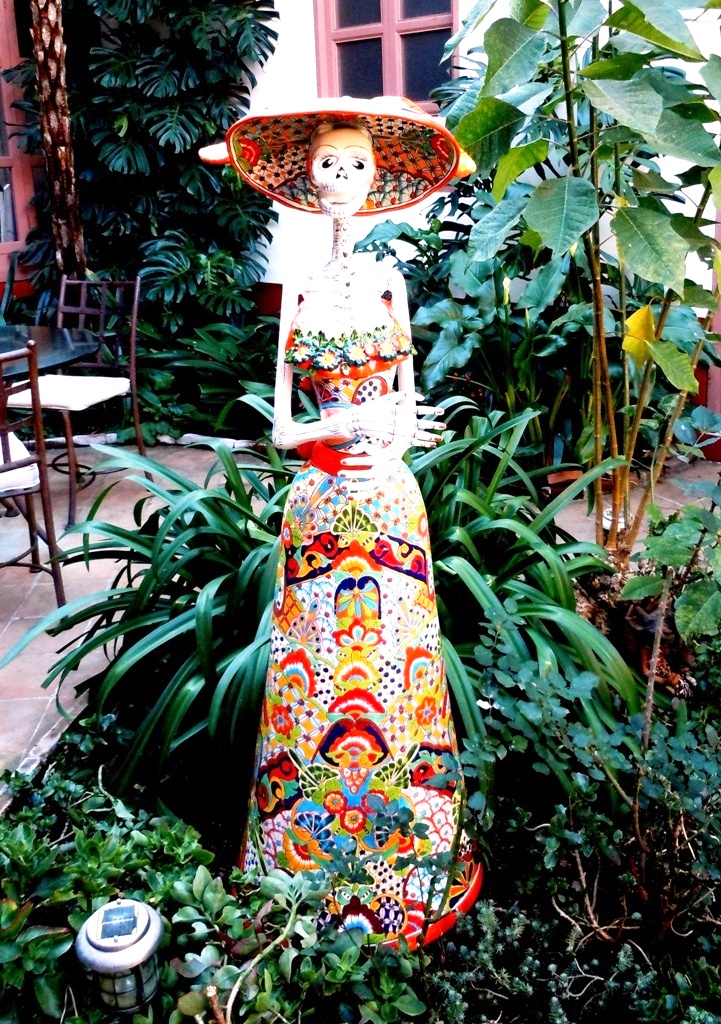 The stores were abundant with local craft, especially lacquer art, copper pots, furniture, weavings and ceramics. Each of the surrounding villages specialize in an art.  We visited the vibrant Mercado.  It was one of the best we have seen in Mexico; the produce was fresh and abundant, and the stalls were impeccably clean.

Loved the pony rides for the kids at the market!

We had a delicious dinner at La Mistonga, one of the most popular restaurants in town, and we found out why.  The food was absolutely delicious. We started off with soup.  I had the garlic soup, and Pat had the Tarasca soup (the Michoacán version of tortilla soup, but we thought it was much better).  Next came chicken marinated in brandy and fine herbs for me; Pat had the Fajitas Michoacanas.  We had a yummy crepe for dessert.  Pat was hooked on the Tarasca soup, and he had to have it again the next day.  We fell in love with this charming town (many ex-pats have now discovered it and are slowly moving in), and we hope to be back soon.

Morelia, Mexico   Morelia is another Unesco World Heritage site, and a beautiful colonial own of over 600,000 inhabitants.  We stayed at the lovely b&b, La Posada de San Antonio, run by an ex-pat (Lino) from Santa Cruz, California.  Lino had collected many Day of the Dead Catrinas and other art made in a nearby village.

After helping us decide what to visit, we left Toby at the b&b with Lino and went to explore the city.  Our first stop was the Tarasca Fountain, near the long aqueduct with 253 arches that was originally built between 1785 and 1788 to meet the city's growing water needs.  It's a pretty sight at night when the arches are illuminated.

The main street was quite busy with lots of traffic, but the old colonial buildings (many built in the 17th century) were very beautiful.  There was even a Woolworth store and Superman! The main plaza had a lovely cathedral, and there were many outdoor restaurants to eat, enjoy the views and people watch.  I honestly felt that I was in some big city in the U.S., such as New York, at times.

We visited the Casa de Artesania where they had on display beautiful handcrafted art made in surrounding pueblos.

We had a delicious dinner at Fonda Las Mercedes, and the art decor was....heavenly!  It was nice to stroll at night and to see the cathedral all lit up.

After a great visit in Morelia, we drove back to Patzcuaro to get our fix of the delicious Tarasca soup before heading home.  I knew we'd be back there sooner than we had planned!