San Diego, California  April 2014  Pat had an accident on April 4.  While working on the roof our home in Merida, Mexico, the composite tile roof he stepped on broke, and he fell through the roof onto the concrete patio.  He had shattered his right pelvis.  He was admitted to Centro Medico de las Americas hospital in Merida.  After xrays and CAT scans, the orthopedic surgeon recommended traction on his foot for 6-8 weeks.  Pat's sister-in-law is a nurse at Syracuse, NY hospital and she gave his xrays to a top orthopedic surgeon.  He recommended immediate surgery at a trauma center in the U.S.  I contacted our international healthcare insurance, Azimuth, and they said that Pat's condition was not life threatening and they would not authorize medical evacuation.  They also said that he could obtain the medical care required in Mexico.  After checking with several surgeons at hospitals in the area, it was recommended by these surgeons that Pat receive his care back in the U.S., as trauma centers were not available locally.  We had previously booked a condo for the summer in San Diego and we were scheduled to leave on April 5.  Since our insurance would not authorize medical evacuation, I contacted Dr. Alexandra Schwartz at UCSD orthopedic trauma center.  She is a top notch orthopedic surgeon who deals in trauma injuries.  She reviewed Pat's xrays and confirmed she could do the surgery in April 10.  She also said it was a life threatening accident, due to the probability blood clots and pneumonia, and said he needed to have acetabular surgery soon.  Pat was in a lot of pain.  I decided to contract air evacuation with Air One, a private Mexican medical evacuation company to arrange the transport to San Diego on April 9.   What a great team we had on board; professional and so kind!  Here's a picture of Pat with the Dr. Esteban Leal and his assistant  en route. 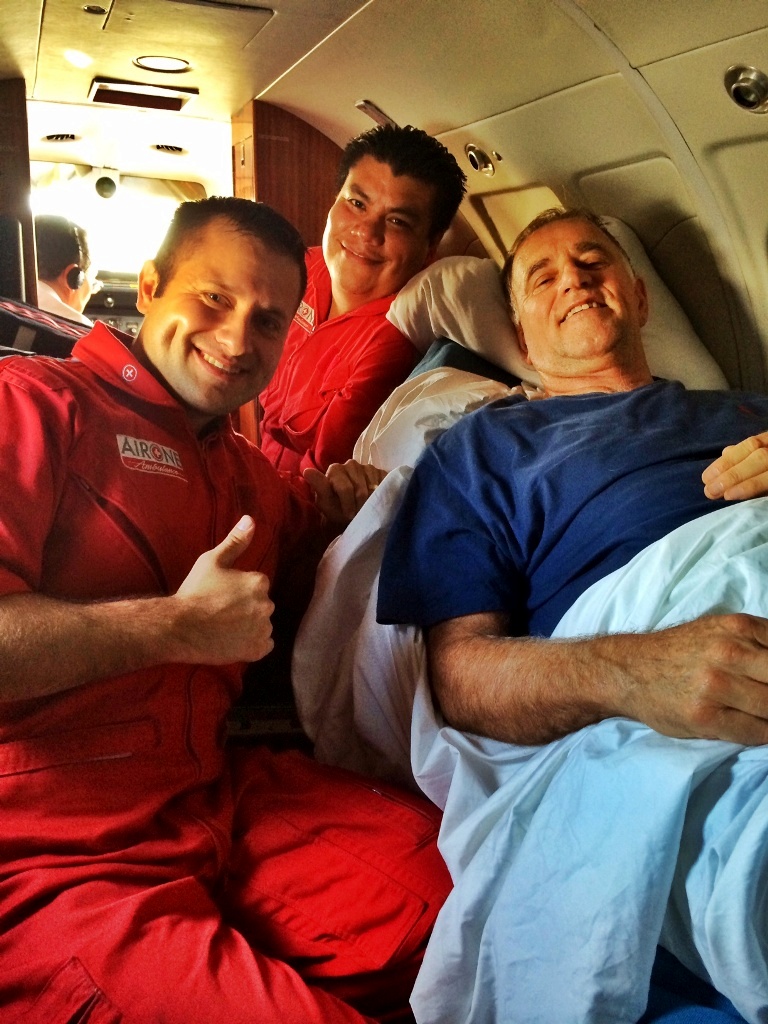 After tests were run at UCSD, surgery had to be postponed a day due to blood clots in both of Pat's legs.  A filter was inserted to prevent the travel of the clot.  The surgery on April 11 lasted nearly 5 hours, with Pat's pelvis being held together by plates and screws.  Now the recovery.  After 5 days in the hospital, Pat was admitted to Sharp Rehabilitation Center for a week.  He was able to move about in a wheelchair and he learned how to stand up and move.

I was able to secure a six month rental in a condo suited for Pat's recovery (a walk in shower and a lap pool for exercise) in the east Village area of downtown San Diego.  We were able to walk to stores, and public transportation (the trolley for me) was easy and convenient.  We didn't buy/lease a car, but we did use their electric Zip cars when we needed to go to doctor checkups or other locales.  So easy and convenient.  Although it was a stressful time, and a long recovery, we enjoyed our time in San Diego.

Soon after Pat was able to get mobile, we took a trip to the Temecula Valley wine region, near San Diego.  We were pleasantly surprised to find such great wines!

Isabelle and Armand visited us in San Diego, and we had a great time.  Armand drove down from Arcata, California where he works at Wild Planet Foods, and Isabelle arrived from Addis Ababa, Ethiopia where she was stationed with USAID. 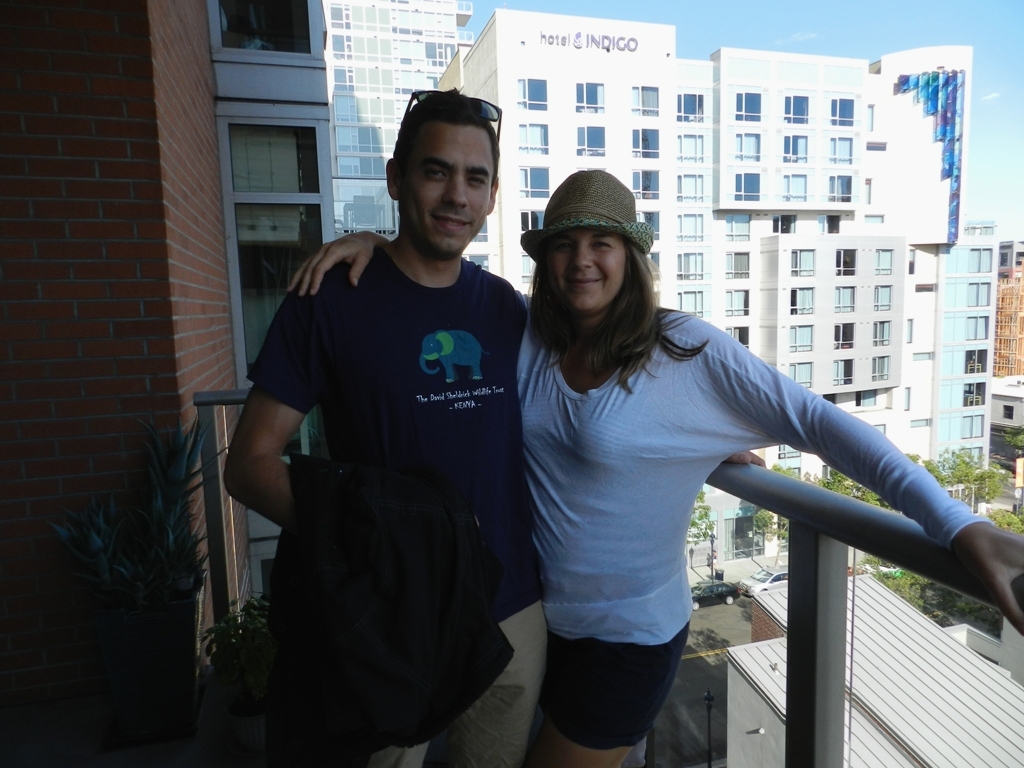 Isabelle and I took a road trip from San Diego to San Francisco.  It was a blast!

We stopped in Santa Barbara, where we did a bicycle tour through the wine country.  Afterwards, we sampled wine and had a delicious picnic lunch.

We headed up Highway 1 to Carmel, where we had a restful stopover.

In San Francisco, we visited my mom who lives there.  We took a drive to Stinson Beach where we enjoyed a walk in the sand.

It was a great trip; it was hard to say goodbye to Isabelle who was soon on her way to her new post with USAID....Kabul, Afghanistan! 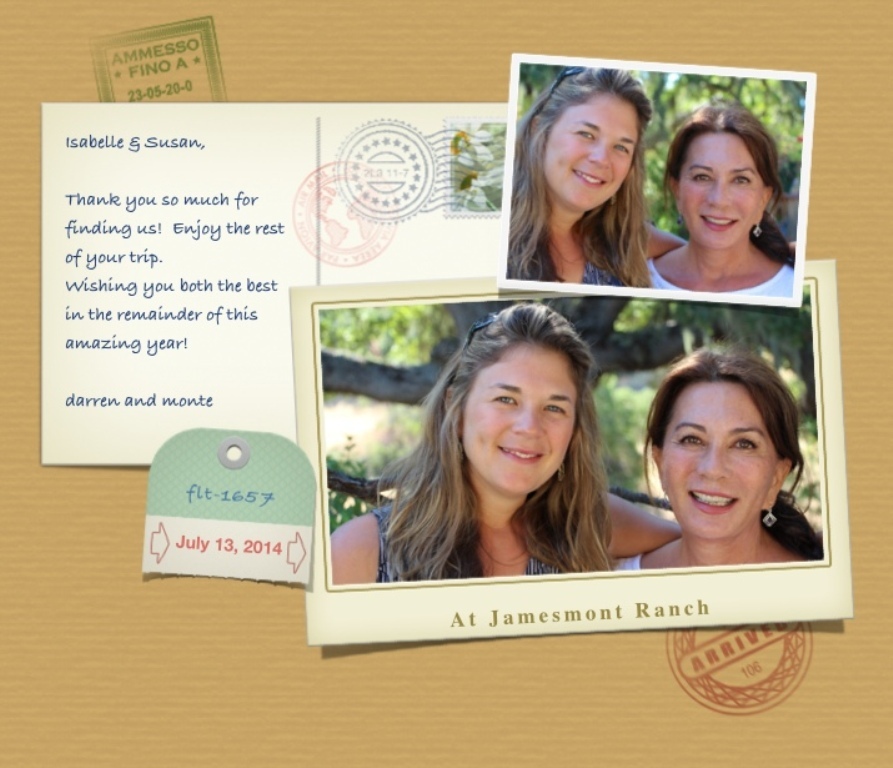