Brisbane, Australia  August 2011  We left San Francisco on August 19 for Los Angeles where we boarded our flight to Australia.  The 14 hour overnight flight was indeed long, but fortunately we slept for half of it.  We arrived to cool weather as it's the end of the winter season.  We stayed in a hotel in the city while we searched for an apartment, opened bank accounts and procured cell phones.  Spring started two weeks after we arrived, and the weather turned pleasantly warm and sunny.  The jacarandas are in bloom and smell wonderful!  The flamboyants were beginning to bloom.

Brisbane is Australia's third largest city.  It is modern, attractive city situated along a windy river. There's a good mix of international people, with a noticeable influx of people from Southeast Asia.  It's easy to get around and there's plenty of walk/jog/bike paths.  There are two ferry boats which service the central business district to the city's suburbs.  In addition, Brisbane has a terrific bus, train and bicycle system.   What's great is that you can purchase one card and use it on all public transport (ferry, train, bus, city bicycle).

They have several city parks, 20 meter cliffs for rock climbing, kayaking on the river and a huge man made beach complete with swimming and volleyball areas.

The city offers great walks with many pretty sights.

The downtown has its share of beautiful old buildings.....

and has some modern architecture... 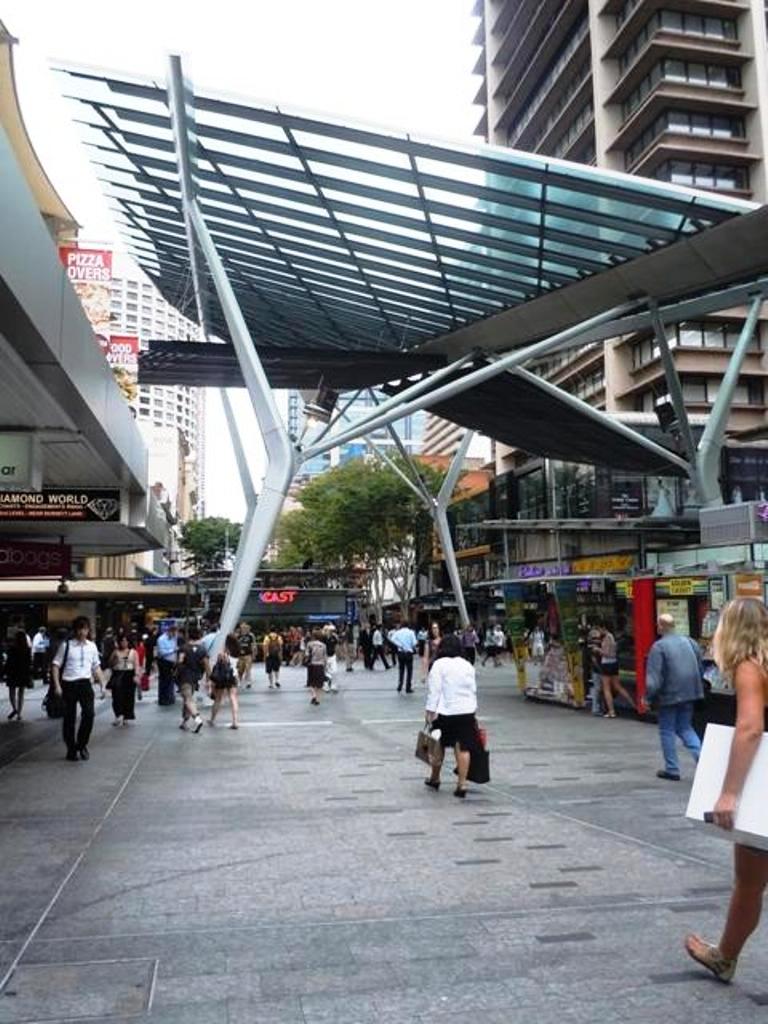 Brisbane has several great farmers markets.  This one is in downtown every Wednesday. 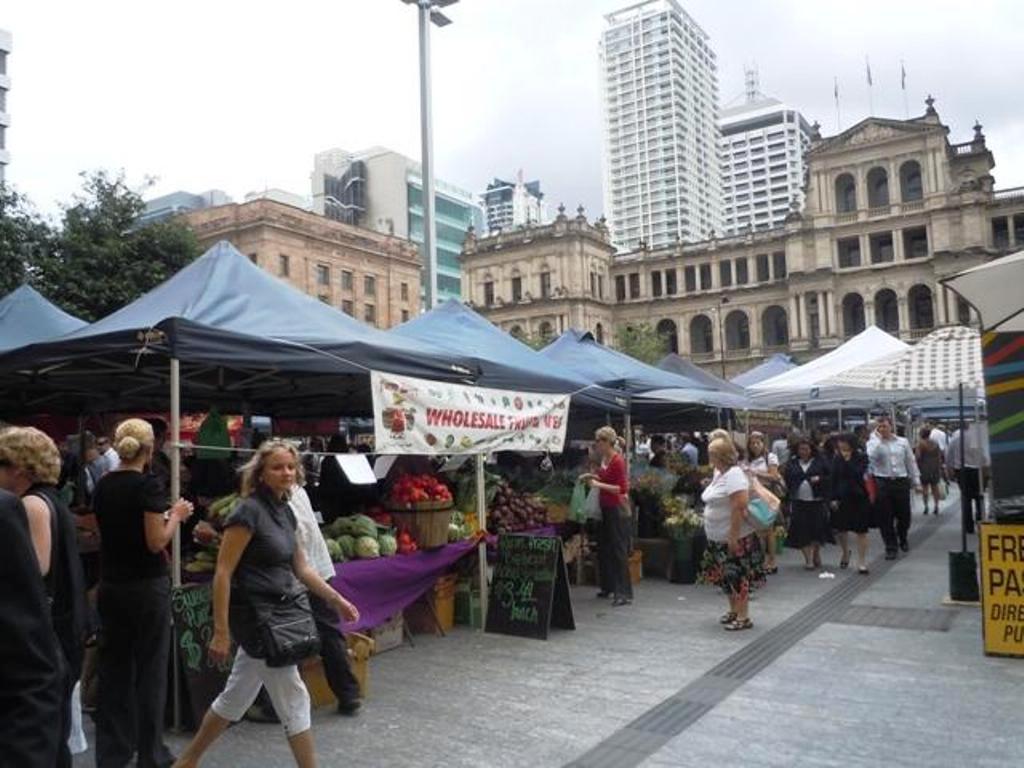 Pat has been consulting at a coal mine located in central Australia, about an 1 1/2 hour flight from the Brisbane airport.  His schedule is currently four days at the mine, with one work day at home.  The mine is a joint venture with Japan, where all of the coal is exported.

After a month at the hotel, we moved into a furnished high rise (29th floor) located in the central business district.  It's in a great location, with a 10 minute walk to the train station, which makes Pat's commute to the airport an easy 30 minutes.  For now, we won't be buying a car and will rely on public transport, our bicycles and walking.  Our apartment has beautiful views of the river and surrounding area. 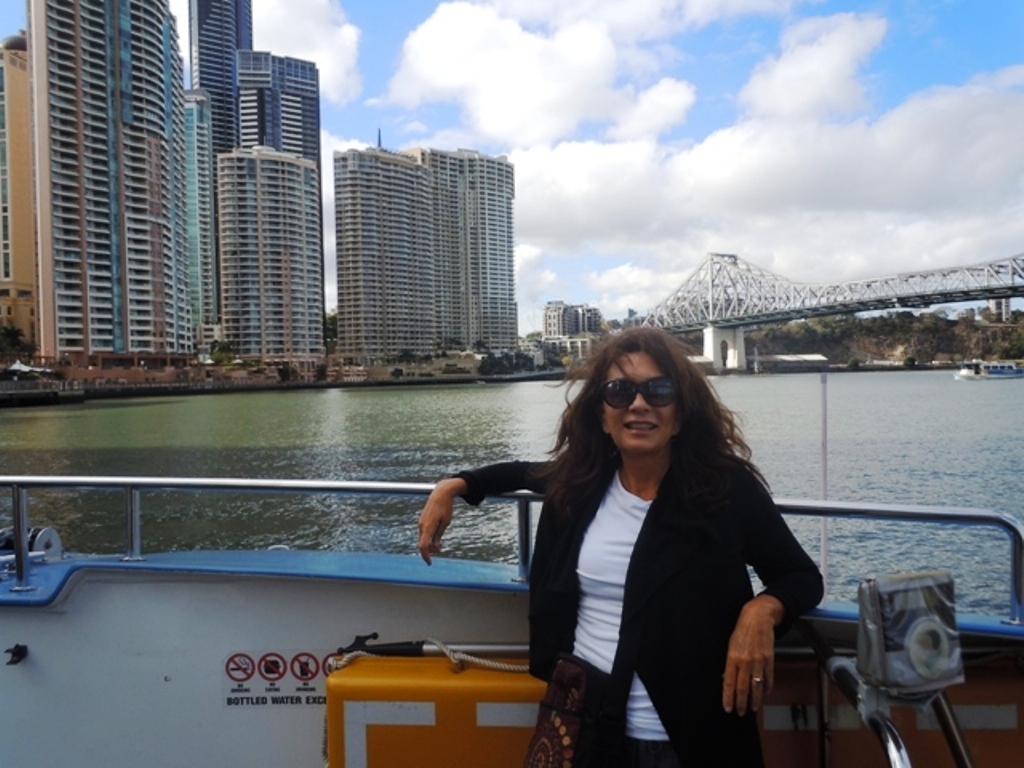 more views from our apartment.... 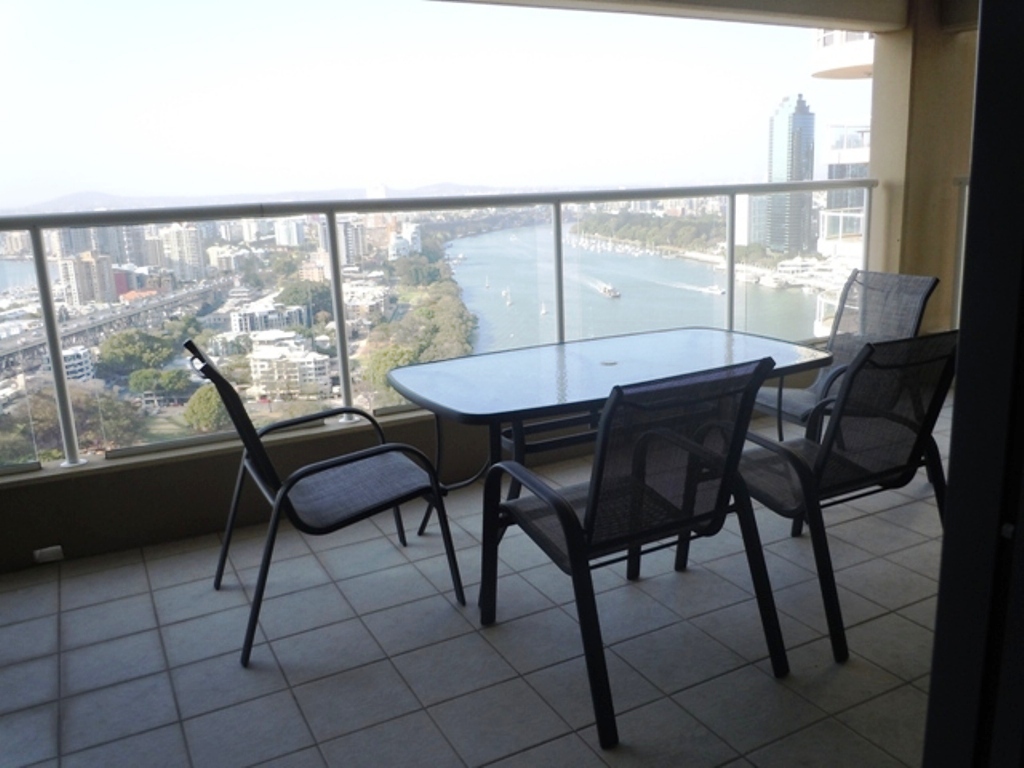 Our building has a gym, sauna, bbq area, lap pool and hot tub. 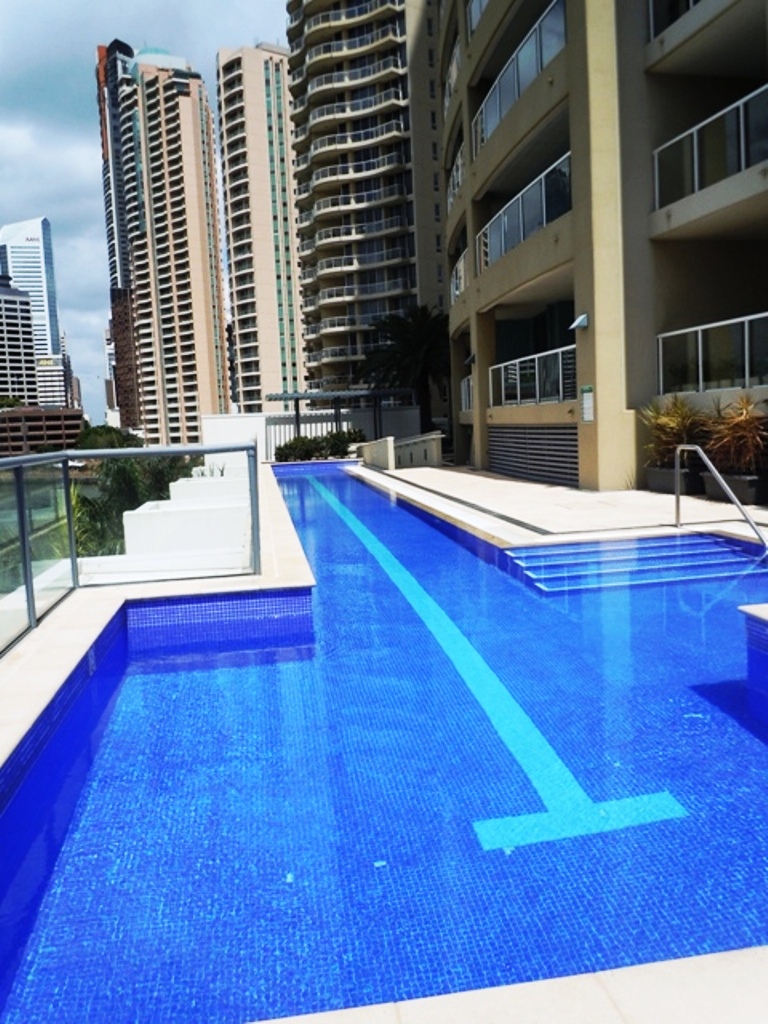 We took the train and caught a ferry to North Stradbroke Island.   We found beautiful deserted beaches with fine white sand, a gorgeous sea, and we spotted a humpback whale and dolphins.

The following weekend, we took the bus to the Gold Coast which reminded us of Miami Beach with beaches that go on forever and highrises along the coastline.  The sand is so fine and white.  The water is just turning warm, and we can't wait to go in in another month.

Queen Elizabeth visited Brisbane (Oct. 24) as part of her tour in Australia.  I managed to get a few photos in front of our apartment.  The boat is en route to South Bank where the Queen will inaugurate a new area of the park.  It's her 16th visit to Australia (and perhaps her last), the first visit was in 1953.   There were lots of people out to welcome her. 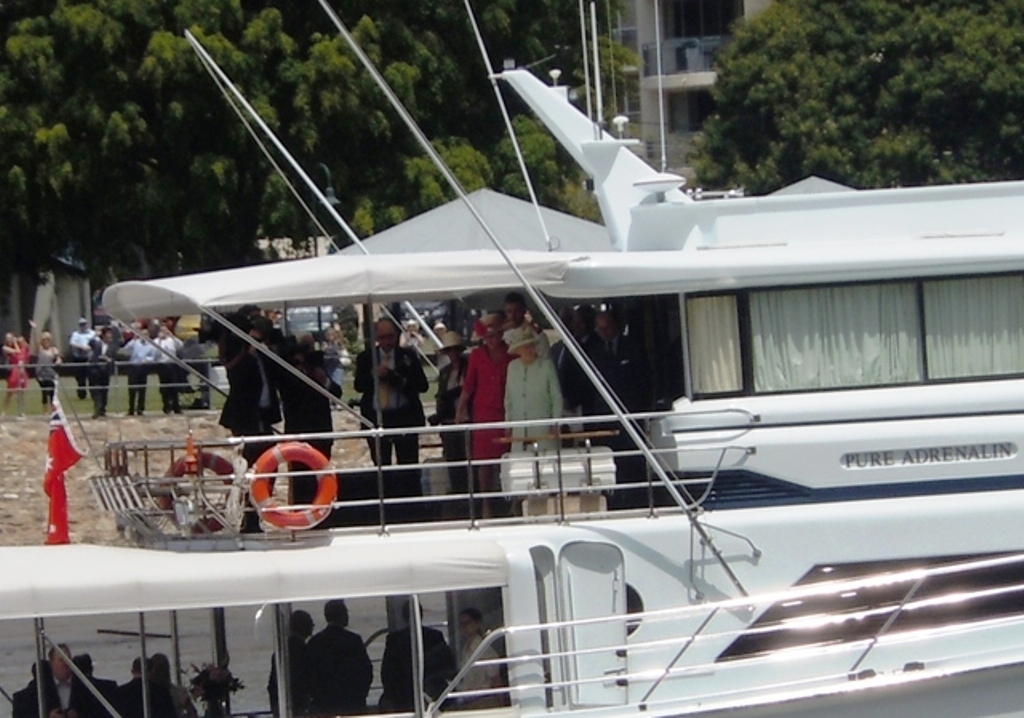 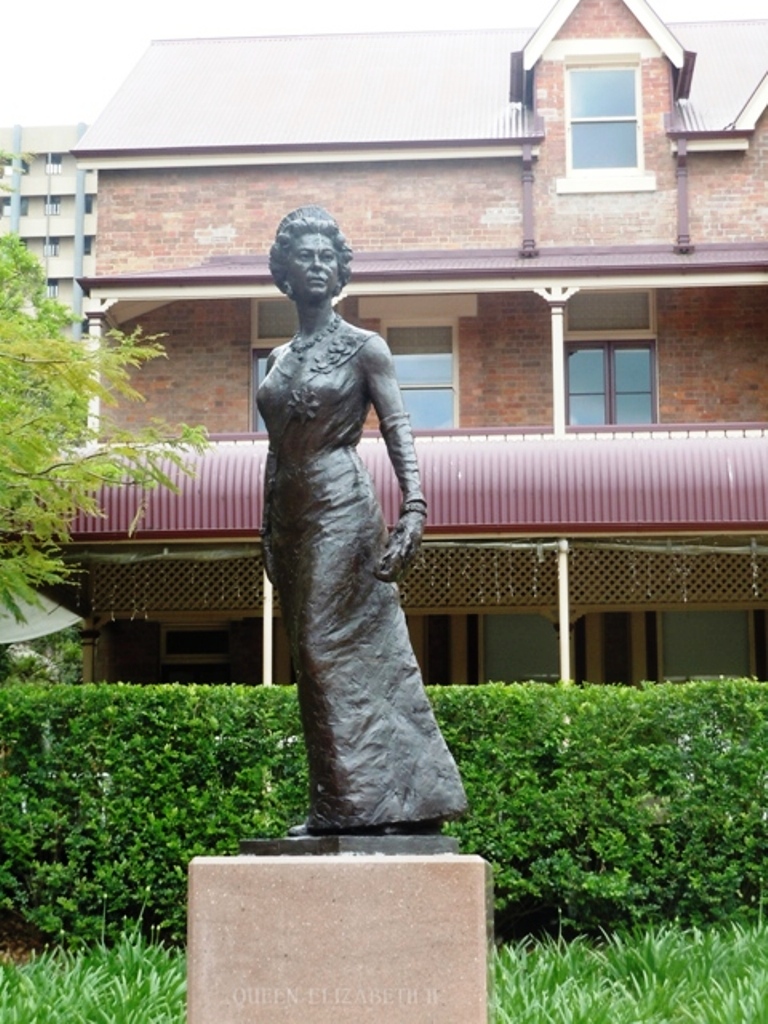 I visited the koala sanctuary near Brisbane, as I'm not when I'll have an opportunity to spot one in the bush.  I had my picture take with one...they are so cute and more lethargic than I thought they would be.  The eucalyptus leaves don't provide much energy so they have a low metabolism.  Most were sleeping as they are noctural animals. 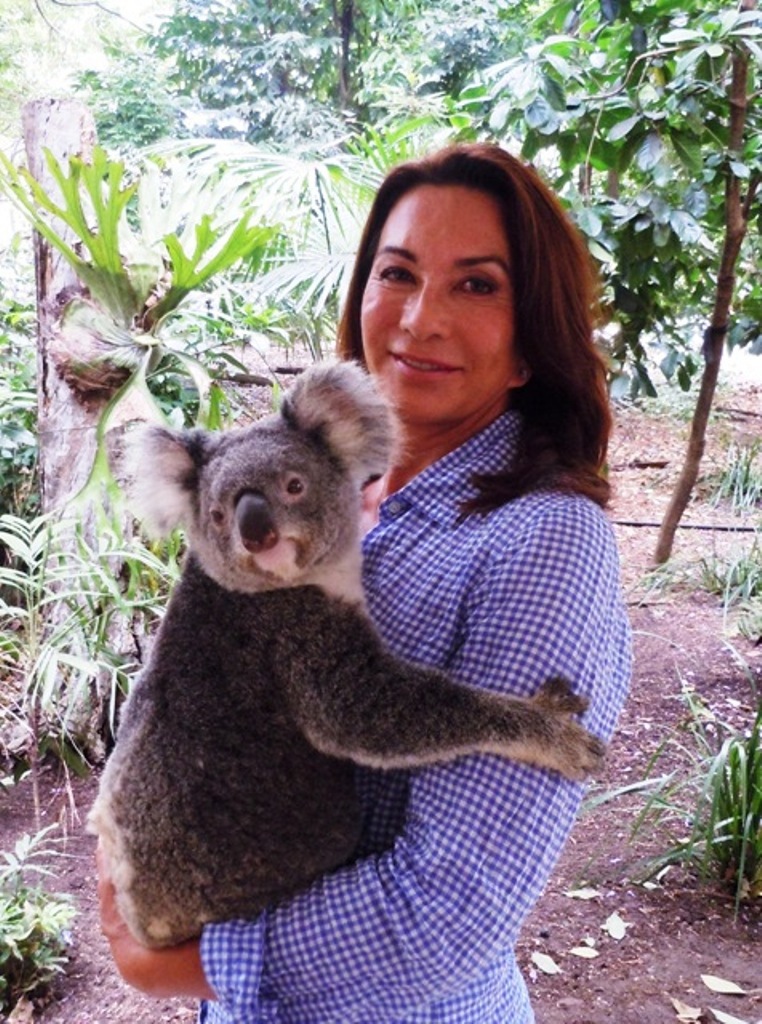 They had many kangaroos roaming free.  Some of the kangaroos had babies in their pouch.  The photo below shows the baby's tail hanging from mom's pouch. 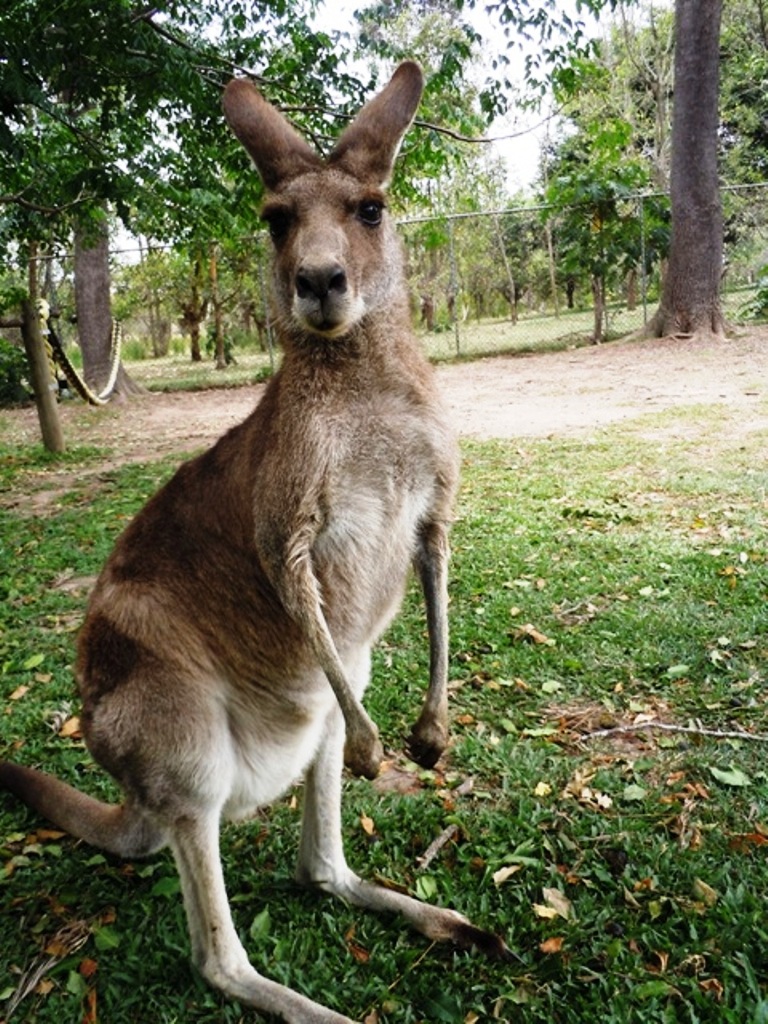 We have found prices higher here than in the U.S., including stores (clothing), restaurants (which are excellent) and real estate.  I guess I won't be shopping much here. Australia doesn't import produce, so if it is not in season you are out of luck. That has been a change for me, as I was able to find just about everything in California.  The Australian economy is very strong,  due to its vast natural resources, agricultural exports and service industries.  The mines have so many jobs open to fill.  The unemployment rate is just over 5%.  Good on ya mate!

Isabelle visited us in January, and we had a wonderful time with her.   We visited the city, Lamington National Park, the Sunshine Coast, and Stradbroke Island.