Miami Beach, Florida  March 2012   Pat and I returned to the U.S. as his company needed him on a six month project in Newfoundland.  We were sad to leave Australia, as we thoroughly enjoyed our time there.  We would welcome the opportunity to return some day.  The timing for us was good......our daughter, Isabelle, was getting married in August and an opportunity to visit family in California and New York.   We settled on living on the east coast for a better commute for Pat and far enough south for warm weather .... Miami Beach fit the bill.  We found a rental in South Beach; a 28th floor condo next to the marina with gorgeous views over the city and the ocean.  It's a short walk to the beach and the neighborhood is great.

Check out the moon over Miami! 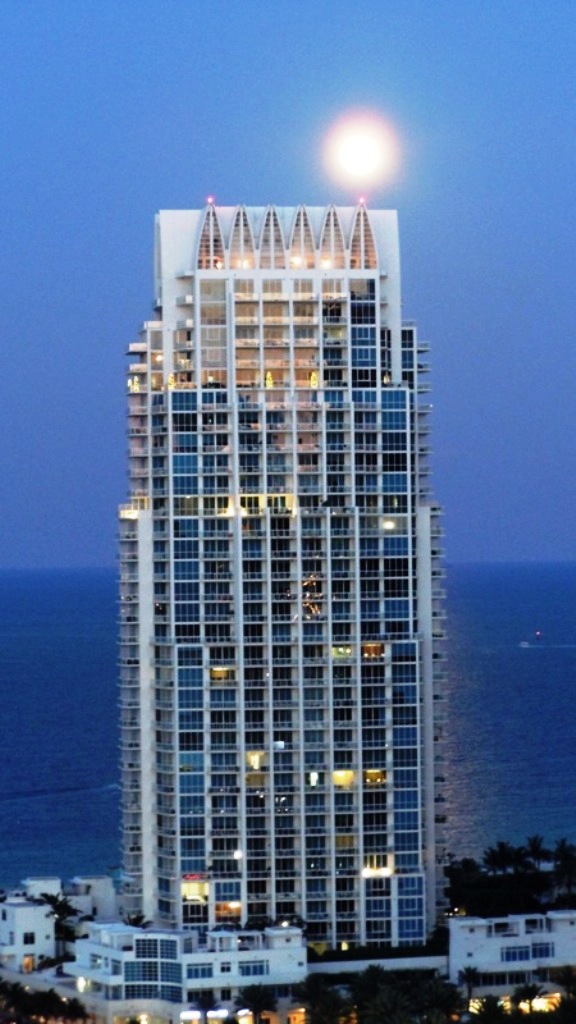 Our condo building is located next to the Miami Beach Marina.

The Volvo around the world sailboat race began in Alicante, Spain last October and is scheduled to finish the beginning of July.  The ports of call: Alicante (Spain), Cape Town (S. Africa), Abu Dhabi (UAE), Sanya (China), Auckland (New Zealand), Itajai (Brazil), Miami, Lisbon (Italy), Lorient (France) and finally Galway (Ireland).   There are six teams, and we witnessed the arrival of the second boat (sponsored by Camper) to arrive in Miami from Brazil....pretty exciting!

Isabelle was visiting me for the weekend, and we were able to catch the beginning of the annual Miami Beach Gay Pride festival.  Lots of fun, music and people watching!

The snorkeling right of South Pointe in Miami beach is surprisingly good, with lots of fish and good coral.   Pat and I often snorkel along the rocks.

We came upon a huge school of mullet fish snorkeling in South Beach; it was quite a surreal experience to be in the middle of it all!

We visited the former winter home (from 1916 until his death) of John Deering, socialite, antiquities collector and American industrialist whose company produced agricultural equipment (now International Harvester Company).  The home is located on Biscayne Bay in the Coconut Grove district of Miami.   Much of the outside property was constructed with local coral.  It was originally a 34 room estate on 180 acres.  It is now a museum which showcases his extensive art collection and beautiful gardens.