Spain August 2015   Pat is working for 3 months at a mine in the Kalahari Desert, South Africa.   I was excited to meet him in San Sebastian, Spain since he left California in late June.  I flew from Lisbon to San Sebastian.  We were looking forward to exploring the Basque region of Spain, and to do some wine tasting in northwest Spain.  Our apartment had a great view of San Sebastian.  We cannot wait to try to the famous pintxos found here!  Pintxos are small snacks typically eaten in small bars, a tradition in northern Spain.

Our first day, we walked up the hill to visit Monte Urgull.  Originally the hill was the defense point since the early ages of the city's foundation in the 12th century.  There are cannons and strongholds, a castle and a 12 meter high Jesus towering over the bay (the statue was added in 1950).  The views are spectacular!

There are 3 beaches in the city, and Playa de la Concha is large and pretty.

We enjoyed exploring the old town, Parte Vieja, where there are charming streets, churches and squares....and filled with delicious pintxos bars!

We were lucky to see the end of the annual bicycle race, the Clasica de San Sebastian.  It is a one day 136 mile race in the hills around San Sebastian, and the tour ends in the city.  Some of the participants were in the Tour de France.  It was amazing to see how fast they ride!

We had the best gin and tonics (with juniper berries) at La Gintoneria which I had read about on Tripadvisor.  The bartender used dry ice which made fog in the glasses.   Sooo good!!

We took the bus to the charming seaside town of Hondarribia.  There is a part of the old town that is walled and filled with fascinating old buildings and homes.

We had a delicious fish lunch near the water at restaurant Urdin.

Our next day trip by bus was the seaside town of Getaria, west of San Sebastian.   We had one of the best meals at restaurant Belearri Jatetxea.

Getaria is the birthplace of the famous fashion designer Cristobal Balenciaga (1895 - 1972).  He is considered the founder and master of high fashion, and influenced other design houses such as Chanel, Dior, Givenchy and many others.  A modern museum was recently built to showcase some of his beautiful clothing, and I was excited to visit the museum.  Many famous women were his clients, including Jacqueline Kennedy.  The museum was nostalgic and very classy.

We left the coast to drive to our bed and breakfast in Abalos, Hotel Villa de Abalos.  Located in a small town, the owners produced their own wine from their vineyards, and we enjoyed their Empatia red wine.  The drive into the hills was scenic.  We stopped at the 13th century medieval town of Laguardia with a population of 1,500.  Laguardia is a gateway to the Rioja wine region.

We had an excellent lunch at the Restaurante Castillo el Collado.

Abalos is a quiet and very pretty small town, and our hotel was small, comfortable and peaceful.

One of the medieval villages we visited was charming San Vicente de la Sonsierra.   Notice how villages and castles were built on hills so that they could defend themselves.

The village has an 11th century church that is amazing:  Santa Maria de la Piscina.  We were fortunate to have a tour inside the church. 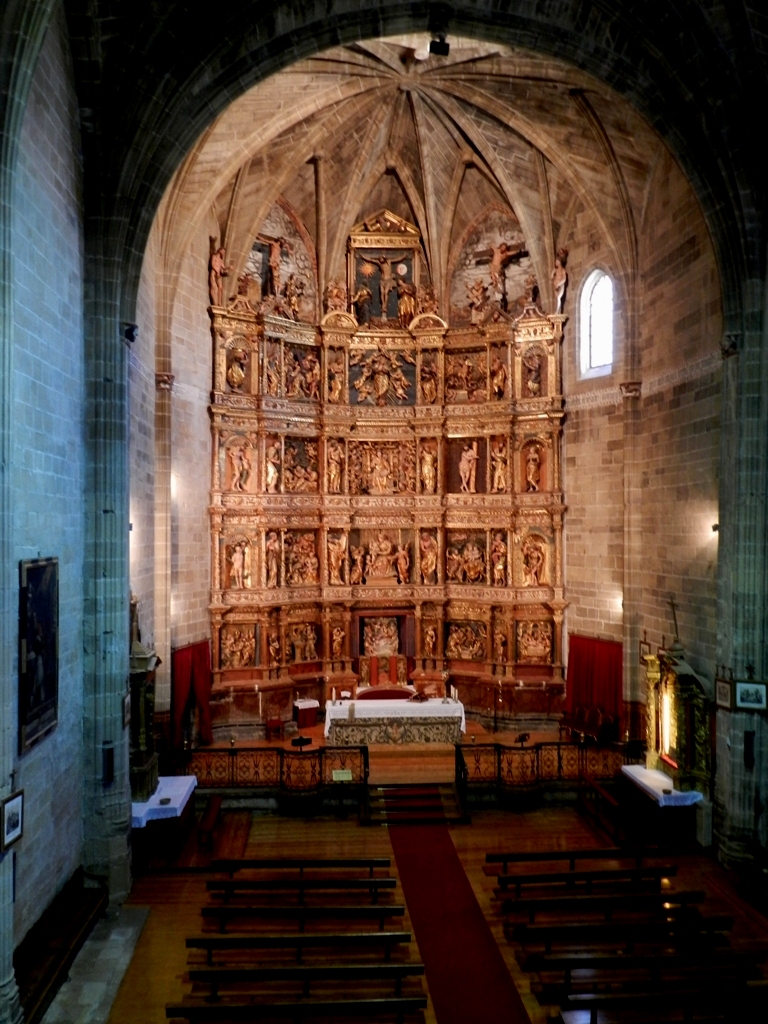 We took a hike up the hill to the Castillo de Davalillo.  The castle/fortress was built between the 12th and 13th centuries for protection against invaders.  We were the only ones there; the view over the wine region was spectacular!

We visited some excellent wineries, including Muga and Lopez de Heredia Vina Tonconiz in Haro and Vivanco in Briones.   We sat at the end of bar (quiet and private), and the server poured 6 glasses to taste at our leisure.   We loved Muga!

Sadly our trip was coming to an end.  Pat was flying back to South Africa, and I was going back to San Francisco.  As we drove to our hotel at the Madrid airport, we passed fields of sunflowers.  A pretty to way to end a spectcular visit to northern Spain!